The Chesapeake Bay Bridge-Tunnel will soon undergo yet another expansion with the addition of two more underwater lanes.

On Sept. 18, a groundbreaking ceremony will be held to christen the new endeavor, known as the Thimble Shoal Tunnel Project. Construction is currently slated to begin in October, with a completion date of October 2022 and total cost of $756 million.

In all, the tunnel will be around one mile, with the Chesapeake Tunnel joint venture consisting of Dragados USA and Schiavone Construction Company LLC acting as the design-build contractor. Dragados specializes in tunnel boring, which is how the new bay tunnels will be created. Previously, the company participated in the construction of the Alaskan Way Viaduct, which utilized the "Bertha" tunnel borer. 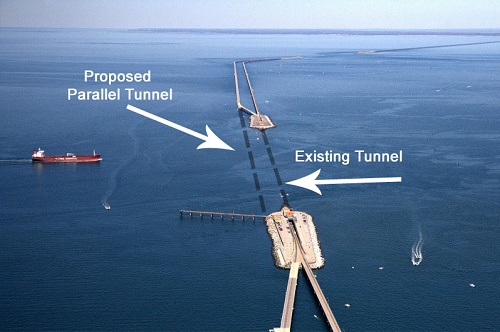 Images: Courtesy of the Chesapeake Bay Bridge-Tunnel
On Sept. 18, a groundbreaking ceremony will be held to christen the new endeavor, known as the Thimble Shoal Tunnel Project. Construction is currently slated to begin in October, with a completion date of October 2022 and total cost of $756 million.

The new underwater lanes will be created with a tunnel boring machine, creating the first tunnel of its type in the Hampton Roads area, according to The Virginian-Pilot. Using this method disrupts less of the bay’s ecosystem, and exposes less of the structure to weather. Approximately 9,000 individual concrete pieces will be used in construction, along with 42,000 cubic yards of concrete required to make the tunnel sections.

The other tunnels in the region—including those in the CBBT—were built using the immersed tube method, in which prefabricated tunnel sections were floated into position, then lowered into place in trenches.

Virginia Secretary of Transportation Aubrey Layne told The Pilot that the new tunnel will add vital redundancy to the U.S. 13 highway corridor, along with reducing congestion and increasing traffic capacity.

“(The) real concern right now," Layne noted, "is without these additional tunnels, If we lose one tunnel, we in effect lose the entire facility, which would be devastating to the Eastern Shore economically.”

Currently, the project is estimated to employ up to 1,000 people. Many will be working in support roles such as concrete fabrication.

There will only be 50 to 100 people working on the few islands that are found along the highway.

The Virginia Originals gift shop, along with the Chesapeake Grill Restaurant, which are both located on one of the islands, will be closed during the construction of the bridge-tunnel expansion.

“The islands are actually very, very limited in space and every square inch—literally—of real estate is valuable,” Kevin Abt, project manager for the parallel tunnel project, told The Pilot.

To accommodate for the restaurant, gift shop and the highway expansion on one of the two islands would add a $200 million cost to the project, an amount that cannot be recouped with revenue brought in by the businesses themselves.

Those using the Bridge-Tunnel for travel may see construction as soon as October, noted The Pilot, but given the expansion will be adding underwater lanes, a lot of what is being done will not be seen on the surface.

“The problem though is with a tunnel, unfortunately, most of the stuff happens where you can’t see it,” Abt noted.

Opened in 1964, the CBBT originally had two lanes above water along with two, two-lane tunnels, noted The Pilot. The 1999 expansion added a parallel two-lane bridge.

Currently, the worst of the traffic congestion is along the south end of the bay-spanning highway, where four lanes merge into two lanes of opposing traffic near the Thimble Shoal Tunnel.

“More of the delays will be alleviated than you would otherwise expect by working at Thimble Shoal first,” Tom Anderson, the CBBT’s deputy director of finance and operations, told The Pilot.

The return of both the restaurant and the gift shop remains unlikely, but Layne did note that the tourist attractions at either end of the tunnel could be enhanced in the future.

“The facility is more than just a traffic corridor—that’s the primary purpose—but it’s one of the seven man-made wonders of the world still as of today,” Layne said.