A Massachusetts nanotechnology company has developed a carbon nanotube paint that absorbs nearly all of the light that hits it—and it's finding uses from outer space to the art studio.

NanoLab Inc., a carbon nanotube manufacturer based out of Waltham, Massachusetts, is responsible for the superblack paint it calls Singularity Black. The coating, a carbon nanotube paint, differs from the already-famous Vantablack, developed by U.K. firm Surrey NanoSystems, in that it is open for anyone and everyone to use. (Surrey has licensed Vantablack exclusively to certain clients for use for particular purpose—setting off a firestorm of criticism when it announced that only British artist Anish Kapoor would be permitted to use the coating in art.) 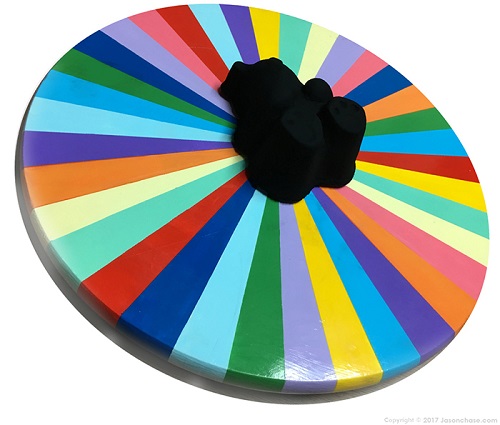 Jason Chase
Jason Chase, an artist also based out of Massachusetts, used Singularity Black to cover a cast-iron gummy bear, displaying the piece against a wooden circle painted with rainbow colors to offset the blackness of the material.

Jason Chase, an artist also based out of Massachusetts, says that it's important for all artists to have access of new paints and pigments.

“Artists are always the ones who take new materials and push them to new limits,” he said in a statement.

Chase is the first artist to use the new Singularity Black by covering a cast-iron gummy bear and displaying the piece against a wooden circle painted with rainbow colors to offset the darkness of the material. Known as Black Iron Ursa, the piece gives the contrast between the absence of light and the rainbow, with the gummy bear itself appearing flat and featureless.

Despite the moniker of the “world’s blackest black,” Vantablack is not, in fact, a paint. Instead, the coating is a dense network of carbon nanotubes, which are grown in a high-heat chamber. Surrey NanoSystems—the company that created Vantablack—has since gone on to create a spray paint version of Vantablack.

Singularity Black, on the other hand, combines carbon nanotubes with a binding agent serving as a stabilizer. The coating was created under contract for NASA in 2011, and was a completely separate venture from Surrey's Vantablack. NanoLab’s coating is used by the space agency to aid in the observation of faraway stars; satellite equipment is coated with it in order to absorb any stray light that might interfere with sensors.

According to NanoLab, Singularity Black should be applied in a spray booth or fume hood, onto a metal surface. A Badger 150 airbrush is most suitable for small scale applications.

After the coating has been applied, a temperature of 572 degrees Fahrenheit is required to activate the coating, along with eliminating the binder, which leaves the carbon nanotubes in a porous arrangement for maximum light absorption. Once this has happened, it becomes a “no-touch” surface. NanoLab also offers a tougher version that can handle incidental contact, but the coating can be repaired with a brush and a heat gun.

The primary downside to Singularity Black is its fragility.

“If you touch it, it’s going to flake off, kind of like when you touch a butterfly’s wings,” Chase told the Boston Globe.

Currently, Chase plans to share his research on how to make the most out of Singularity Black in an artistic sense, with hopes of curating a show featuring works made with the new coating.

NanoLab also estimates that Singularity Black will cost in the low- to mid- hundreds range for 250 milliliters to one liter of paint.

Black Iron Ursa will be on view Aug. 24 at Laconia Gallery, in Boston, and Sept. 6 at the Artisan’s Asylum in Somerville, Massachusetts.