Ultra-high-performance concrete will be used in the overlay for a deficient bridge in Delaware, an "innovative" material usage that has netted the project a $275,000 federal grant.

Reviving the Blackbird bridge will require a full road closure, according to Delaware Online. The project involves replacing existing corrugated metal pipe arches with pre-stressed concrete box beams on concrete stub abutments with the ultra-high-performance concrete overlay, noted the Delaware Department of Transportation, and there will also be minor reconstruction of roadway approaches, along with the installation of guardrails and the placement of riprap in the stream for erosion prevention.

Significant corrosion at the waterline has been reported, with 100 percent section loss at several locations throughtout the pipes. Sections of the new span will be built using precast materials then brought onsite. While this trims down on total construction time, it does increase construction cost.

Zack Excavating Inc., of New Smyrna, Delaware, was the lowest out of five bids on the project, winning the contract for $1,024,801.25.

The current contract duration is slated for 89 calendar days, which includes the advance work of clearing, grubbing, and relocating the utilities, notes Delaware Online.

The Federal Highway Administration granted DelDOT $275,000 in response to the use of the high-performance concrete, which demonstrates a forward-thinking investment in upgrading Delaware’s infrastructure. 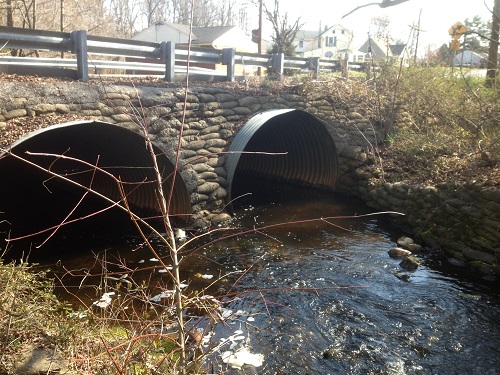 DelDOT
Significant corrosion at the waterline has been reported, with 100 percent section loss at several locations throughtout the pipes.

"This grant is a result of DelDOT's efforts to use new technologies and employ advanced materials to improve Delaware's infrastructure,” said Sen. Chris Coons, D-Del., in a statement. “The use of ultra-high-performance concrete for a bridge over Blackbird Creek is the kind of modern approach the U.S. Department of Transportation wants states to be using as we work to upgrade our nation's infrastructure.”

"Making smart investments in the roads, highways and bridges that so many Delawareans use and depend on every day improves our local infrastructure and also saves taxpayer dollars in the long run," said Sen. Tom Carper, D-Del., in a statement.

“By using advanced technologies, we can build a more modern and more sustainable bridge that is stronger and will require fewer repairs in the years to come."

The road is currently slated to re-open in mid-September.