Roman Concrete Could Be Key for Seawalls

Ancient technology may be what helps prevent future damage for coastal cities, according to experts in concrete.

The ancient Romans are known for having created structures that have outlasted their empire by thousands of years, and this is largely due to their concrete. A mix of volcanic ash and quicklime, the building material has withstood the power of the sea for two millennia and counting. According to The Washington Post, the concrete is stronger now than when it was first mixed.

Marie Jackson, an expert in Roman concrete from the University of Utah, along with colleagues, looked at the structure of a concrete sample at a microscopic level. These samples, which had been extracted from seawalls and piers as part of the Roman Maritime Concrete Study project, revealed that the concrete behaves much like volcanic deposits in submarine environments, according to Jackson.

In a study published earlier this month by American Mineralogist, Roman concrete is filled with tiny growing crystals. The crystals are almost like small armor plates, and prevent the concrete from fracturing. 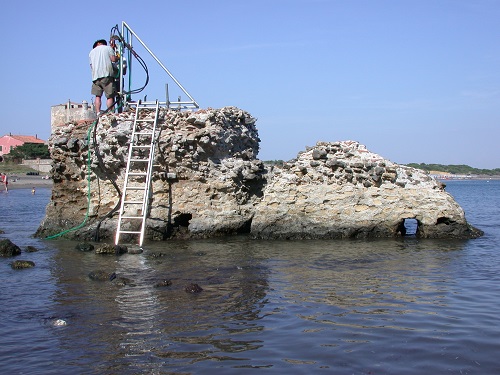 Pictured: drilling at a marine structure in Portus Cosanus, Tuscany, 2003. J.P. Oleson
With all of these factors combined, it becomes evident that Roman cement itself is hydraulic—it can set underwater, or in wet conditions.

After a series of spectroscopic tests and observation with advanced imaging techniques, what became evident was that the concrete’s strength stems from a rare chemical reaction: aluminous tobermorite crystals growing out of another mineral called phillipsite. According to Jackson, as seawater found its way into cracks in the concrete, it reacted with the phillipsite, which is naturally occurring in volcanic rock, and formed tobermorite crystals.

“Aluminous tobermorite is very difficult to produce,” Jackson said in a statement. She went on to note that high temperatures and a lot of energy are required to even synthesize a small amount. To make the most of this kind of concrete, it would be most cost-efficient to harvest aluminous tobermorite where it forms—in volcanoes. These crystals are what reinforces the concrete and makes it so durable.

With all of these factors combined, it becomes evident that Roman cement itself is hydraulic—it can set underwater, or in wet conditions. According to Popular Mechanics, the Romans mixed this cement with volcanic ash from the Naples region. Between 22 and 10 BCE, the Romans constructed an underwater concrete foundation for Caesarea, an ancient city in what is now Israel. These marine structures are still standing today.

Pliny the Elder—Roman philosopher, author and historian—wrote an ode to concrete, in which he detailed that “as soon as it comes into contact with the waves of the sea and is submerged becomes a single stone mass, impregnable to the waves."

Jackson is attempting to recreate the Roman concrete with volcanic rocks found around San Francisco, and local seawater. The researcher already has several samples in her lab, where she will test for evidence of similar chemical reactions.

In a 2014 study conducted by European scientists, it was predicted that if the next 90 years follow the patterns of what has passed in the last 30, cost of constructing barriers against the sea—like sea walls—could rise to $71 billion per year. Without these preventative measures, coastal flooding could do trillions of dollars in damage annually.

Sea walls themselves are not designed to block sea water entirely. Instead, they are in place to help prevent water reaching coastal cities during high tide, and when storms might cause flooding. Venice is already falling prey to rising sea levels.

According to The Washington Post, modern concrete walls require reinforcements. For the Romans, steel was not required.

“It's not just a historical curiosity,” said Philip Brune, a research scientist at DuPont Pioneer. “It may yet have a part to play.”