A team of U.S. Navy scientists will be traveling to the Pentagon to celebrate the culmination of years of hard work.

The team, which has earned the Dr. Delores M. Etter Top Scientists and Engineers Award for 2016, produced three methods that would get better quality products, including corrosion-control techniques, to warfighters more quickly, according to NAVAIR. 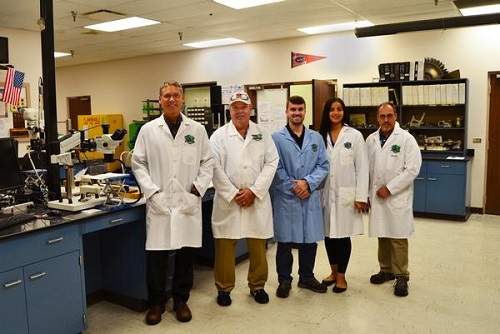 The award was established in 2006, in honor of the former assistant secretary of the Navy in the research, development and acquisitions branch, and is given to teams of Navy scientists and engineers who do outstanding work in their respective fields. Members of the group include lead materials engineer Jack Benfer, senior chemist Ruben Prado, engineer technician Rodney Williamson, materials engineer Peter Sheridan and chemical engineer Luzmarie Youngers.

The team’s accomplishments are three-fold:

In terms of chemical milling, removing material with chemicals rather than traditional mechanical milling is both faster and more precise. During the process, chemical milling “eats” away metal in targeted areas until it reaches the desired thickness.

“Before we had the chemical milling capability, many components couldn’t be fabricated here at the plant,” Benfer said. “They had to go to outside sources with a lengthy turnaround time.

“Now with chemical milling we’re able to get that work performed here, and get it completed much faster.”

The team’s two other accomplishments deal directly with corrosion control: more effective anodizing and the introduction of nickel-plating for steel aircraft components.

Seeking an alternative to traditional anodizing methods began 12 years ago, when it became apparent that it was time to eliminate processes that used harmful materials, where possible. “This all began by looking for environmental benefits,” Prado said.

Finally, the team’s new nickel-plating line works as an active coating, which protects steel parts by releasing electrons when scratched. An aircraft carrier equipped with this plating is currently deployed so the durability of the plating can be tested.

“We think that, not only will it be safer than cadmium plating, it will also be more durable,” Prado said.