The consortium behind a planned offshore wind farm for Lake Erie near Cleveland is working on securing suppliers for the construction and installation of the array, which would be the first freshwater wind farm in the United States.

The Icebreaker Wind project, backed by the Lake Erie Energy Development Corporation, would bring a relatively small array—six turbines—to a site on Lake Erie, 8-10 miles northwest of Cleveland. Each turbine would have a 3.5-megawatt capacity, giving the project a total capacity of 20.7 megawatts. The project’s cost is estimated at $126 million. 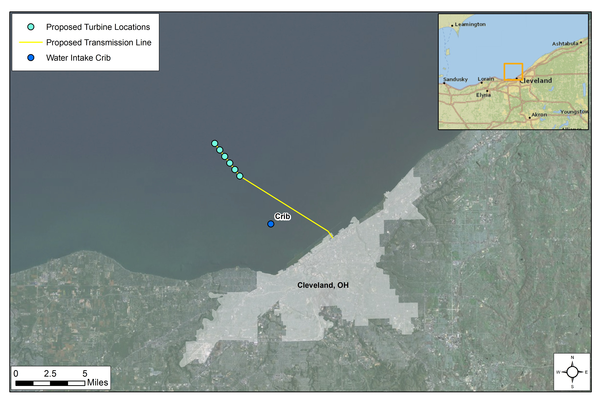 LEEDCo is working with Fred. Olsen Renewables USA on the project. The U.S. Department of Energy has issued grants to help with project costs.

After public meetings last fall, LEEDCo applied in February for a state permit to operate the wind farm. That process is still ongoing, but the organization is now working with supply-chain advisory group GLWN to find potential suppliers, in hopes that construction will begin next year, and installation will take place in 2019.

The first phases of construction—the underwater cables to transport electricity from the turbines to land, and a modular substation—are now out for bid, according to Cleveland.com. GLWN is working on establishing a database of potential suppliers for other aspects of the massive project.

The name “Icebreaker” has something of a double meaning: The wind farm will include components that literally break the ice of Lake Erie, which freezes over in winter, but the project is also planned as a model to spur further investment in offshore wind throughout the Great Lakes region and the United States in general.

LEEDCo says the piles anchoring the towers into the bed of the lake will be based on a "Mono Bucket" design created by Universal Foundation, of Denmark. The organization describes the design as "an all-in-one steel structure consisting of a monopile shaft attached to a large-diameter bucket" installed via a suction system that requires no pile-driving. LEEDCo says one prototype model has stood off Denmark for 15 years.

According to Cleveland.com, the turbines and nacelles will be built by a joint venture of Mitsubishi Heavy Industries, of Japan, and Denmark’s Vestas Wind Systems. The news site reports that Vestas will likely build the structures in Denmark rather than at its facility in Colorado, because water transport will be easier than land transport would be.

Last year, LEEDCo announced that Cleveland-based Middough Engineering would design the land-based components of the system.

The only offshore wind farm off the U.S. coast is the Block Island Wind Farm, off the shore of Rhode Island; with five turbines, that array has a capacity of 30 megawatts. A potential wind farm off the North Carolina coast, the lease for which is held by Spanish firm Avangrid Inc., would produce up to 1,486 megawatts, but experts have said they don’t anticipate its construction beginning for at least another decade.