An iconic U.S. battleship is facing an uncertain future because of corrosion.

On Sunday (June 11), the USS Texas was closed down when crews at the LaPorte, Texas, historic site where it's docked noticed the ship was off-kilter. A sudden leak had caused the vessel to list to one side, and an investigation began to turn up a number of holes.

On Monday morning, dive teams and emergency crews had to patch a 6-by-8-inch hole, the first of seven found by 4:45 p.m. that day. By Tuesday, a total of 13 holes had been uncovered, and as of Wednesday (June 14), water was still pouring into the ship, according to reports.

The USS Texas is the last remaining U.S. battleship of its kind to have seen two world wars. Originally commissioned by the Navy on March 12, 1914, the ship was once one of the most powerful weapons in the world. It had the capacity to mount anti-aircraft guns (the first to do so, in 1916), and was the first to use computer control for increased accuracy for its guns. The USS Texas’ last mission was in 1945, and it was decommissioned in 1948. 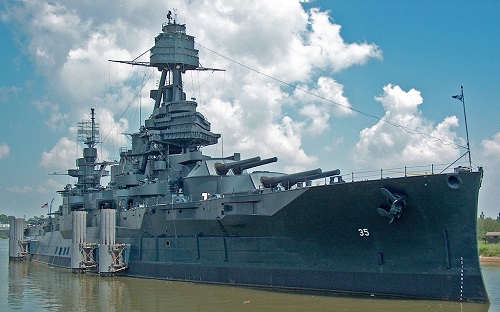 Frank H. Brueckner, US Navy, public domain, via Wikimedia Commons
The USS Texas is the last remaining U.S. battleship of its kind to have seen two world wars.

It currently serves as a museum, overseen by the Texas Parks & Wildlife Department, and has been a National Historic Landmark since 1976.

By the late 1960s, the ship’s hull was leaking, with the wooden deck also rotting and leaking badly. In 1971, $50,000 in charitable funding helped the hull get sandblasted and painted. In 1988, the ship was towed to a Galveston dry dock, where it had 15 percent of its hull replaced at a cost of $15 million.

In 2007, Texas voters approved a $25 million bond to get the ship dry-berthed to try to halt deterioration, but the funds did not disburse until June of 2010. The wait resulted in a corroding hull and new leaks in the ship. In 2013, some of the leaks were repaired as part of a $20 million rehab performed by Taylor Marine Construction, according to Texas Parks & Wildlife. That same year, officials estimated the cost of completely dry-berthing the ship at $80 million.

The USS Texas is dealing with corrosion on all fronts—inside and outside. Another $17.5 million in repairs from a $25 million allocation in 2015 are currently underway, with a projected completion date in early 2018.

As it stands, the future of the ship remains uncertain, given the scope of the newly discovered problems

"This story is about the fight between water and steel, and water always wins that fight," Bruce Bramlett, executive director of the Battleship Texas Foundation, told the Houston Chronicle.

There is no word as yet when the ship will reopen.