Though this is its first job in the States, Meganom has worked on high-profile projects in Russia such as an extension at the Pushkin State Museum of Fine Arts, a renovation of the Kremlin Museum and a new masterplan of Gorky Park. 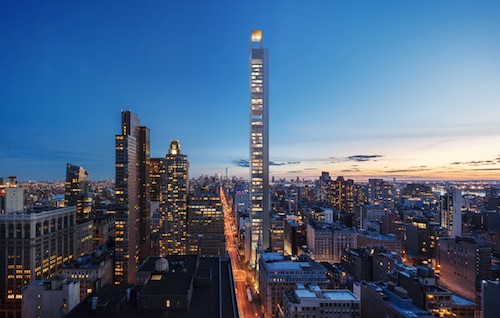 "Meganom is virtually unknown in the West, yet have tackled some of the biggest and most complex projects in Russia," the team said.

Each story is slated to a condominium with the floor plans completely open—so open that the structure of the building is completely different than others in the NYC high-rise scene.

The mechanical core of the building will run up the west side of the tower, instead of in the middle, where it would traditionally be set, allowing for the spaces to be completely open. The north and south sides of the tower are filled with floor-to-ceiling windows and the eastern facade will feature porthole windows.

The tower will be topped with a metal-framed “crown” that will serve as an observation deck.

“The spine is separate from the body in order to achieve the unobstructed volume of the apartments and providing the ability to keep the open spaces inside the residences with panoramic views,” Meganom says on its website. “The optimal apartment plan with clear span and without vertical communications has been defined for the residence. The interiors become clean, flexible and open.”

“Unobstructed” is not a word that comes to mind for critics who say that the construction of such a tall tower will hinder the views of many from the Empire State Building. Others complain about how these towers are changing the city’s famed skyline.

This tower joins other “supertalls” such as the One Vanderbilt, which stands at 1,401 feet tall, and Zaha Hadid’s proposed tower further down on Fifth Avenue, which would stand at 1,400 feet tall.

Boris Kuzinez, the billionaire behind Five Points Development, bought the lots of 260-264 Fifth Ave. last year at $59 million. Permits for the tower were submitted in September 2016, and at that point the plan was for only a 928-foot structure.

A historic, 12-story limestone building adjacent to the tower will remain, while two other vacant properties on the lots have already been demolished.

New York-based firm SLCE is serving as architect of record and WSP is joining the project with infrastructure and engineering.