Researchers out of Princeton University’s Muir chemistry lab have developed new surface coatings that appear to be an incredibly effective tool in inhibiting—or, alternatively, assisting—the growth of bacteria. Based on a process called quorum sensing, the newly developed materials could provide some highly desirable benefits for wastewater facilities.

As the Princeton team explains in a recent article in Nature Microbiology, bacteria cluster together in fortress-like formations called biofilms. In places like hospital environments, quorum sensing can combat these formations, making the bacteria more susceptible to antibiotics and disinfectants. Alternatively, in a wastewater treatment environment, the benefits of bacteria can be amplified with this molecular group coordination. 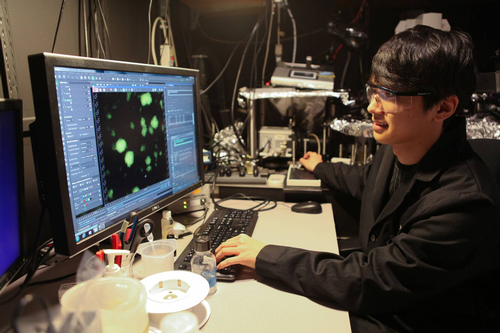 The primary focus of the research for developing this technology was on Staphylococcus aureus, more commonly known as staph. Staph is an infectious problem in hospitals everywhere, especially for patients who have received a medical implant.

In staph, quorum-sensing is driven by the secreted molecule AIP. If a nearby colony is arranged in the biofilm state, the attachment of AIP will prompt the colony to disassemble, or prevent biofilm from forming at all. If this process is allowed to naturally continue, however, the bacteria enters a state that can make people sick.

In an attempt to control this process, Princeton researchers created surfaces with AIP and TrAIP-II, a synthetic derivative of AIP that had been developed in the Muir lab. When faced with the challenge of linking molecules together, the answer was in “click chemistry”—a method that builds bigger molecular units from the assembly of smaller ones.

According to Princeton, the “technique successfully bridged the quorum-sensing molecules to ‘linker’ molecules attached to surfaces including glass, plastic and metal.” On the surface studded with AIP, staph stopped creating biofilms. On the TrAIP-II surface, staph was prevented from making toxins through inhibited quorum sensing.

Researchers tested these coatings in real-world environments, and in the presence of both moving water and air—a similar environment to what would be found in industrial pipes—the biomolecules remained attached and functional, with no signs of diminishment in functionality even after five weeks in storage.

“One can now imagine surfaces coated with these or other quorum-sensing molecules or derivatives for use in medicine, industry or agriculture that are resistant to colonization by harmful bacteria or promote colonization by beneficial bacteria,” Bassler said.

According to Stone, “We believe this surface-focused approach can be impactful. We hope to continue the research and work with potential partners who might have applications that would benefit from the approach we are developing at Princeton.”

Quorum sensing was also the key to a recent development in antifouling coatings, introduced by researchers at Germany’s Johannes Gutenberg University Mainz. In that research, Karoline Herget suggested that cerium dioxide could be used in coatings to stifle quorum sensing in algae and other organisms, stopping the growth of biofilms on marine structures.