A South Carolina contractor is facing an $81,000 bill from federal regulators after a safety inspection at a marine terminal allegedly turned up violations related to silica exposure.

The Occupational Safety and Health Administration has proposed $81,489 in fines for Cape Romain Contractors Inc., of Wando, based on a scheduled inspection that took place in March. The agency issued the company 11 “serious” and three “other” violations related to work that was being done at Berth 1 of Mt. Pleasant’s Wando Welch Terminal, the largest marine terminal in the Port of Charleston.

According to OSHA, workers who were using pneumatic tools to remove delaminated concrete from piles underneath the pier at the terminal were not equipped with the proper respiratory equipment to protect them from dust containing respirable crystalline silica. 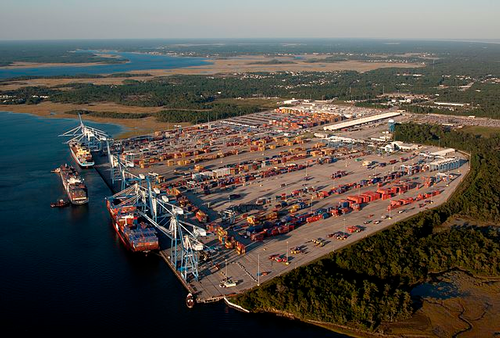 South Carolina Ports Authority, CC BY-SA 3.0, via Wikimedia Commons
OSHA issued 11 “serious” and three “other” violations related to work that was being done at Berth 1 of Mt. Pleasant’s Wando Welch Terminal, the largest marine terminal in the Port of Charleston.

OSHA says workers were exposed to respirable silica at concentrations of up to 2.68 times the permissible exposure limit.

Cape Romain, the agency says, did not implement sufficient engineering controls in order to limit workers’ exposure to respirable crystalline silica. Pneumatic angle grinders and chipping hammers being used on the job were not outfitted with dust collection or water delivery systems that would have prevented much of the respirable dust from becoming airborne.

There was not a designated administrator for respiratory protection at the site, the agency alleges, and the contractor did not conduct air monitoring to ensure workers’ safety during the concrete removal.

OSHA also lists a number of other violations related to the fit-testing and cleaning of respirators that were used, medical evaluations that should have been conducted prior to fit-testing, respirator training and respirator fit issues related to workers’ facial hair.

The mixing of epoxy materials was also the source of a violation at the site; OSHA says an eyewash was not provided in the area where workers were mixing a three-part marine epoxy grout and a two-part structural epoxy adhesive.

According to Cape Romain’s website, the company is currently contracted by the South Carolina State Ports Authority for the $38 million rehabilitation of the Wando Welch Terminal Wharf Structure. The project, which includes repairs to the concrete piles, pile cap and deck as well as the addition of steel piles, is expected to be complete early next year.

In addition to work on marine structures and trip walls, Cape Romain also builds and repairs bridges. The firm has faced no other violations from OSHA in the past five years.

According to an OSHA spokesperson, the company has scheduled an informal conference to discuss the fines. Cape Romain did not immediately return a request for comment Monday (June 5).