The Federal Highway Administration announced Monday (May 22) that it has suspended a New Castle, Pennsylvania, bridge-painting firm and its owner, who faces charges in relation to an alleged payroll scheme on an eastern Pennsylvania bridge job.

The FHWA suspended and proposed the debarment of Hercules Painting Company Inc., along with owner Maria Savakis, based on allegations that Savakis ran a fraudulent payroll scheme during the 2011 George C. Platt Memorial Bridge Project, in Philadelphia. 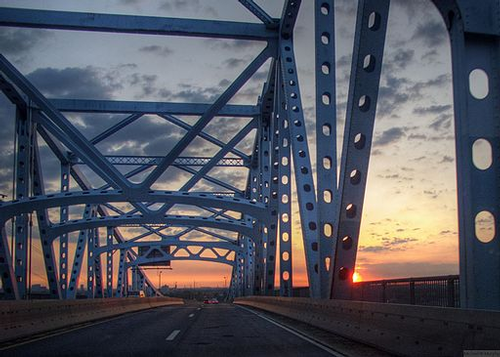 Michael Murphy, CC BY-SA 2.0, via Wikimedia Commons
The Platt Bridge Project, in Philadelphia, was a $42.7 million rehab job carried out by a joint venture of Hercules and the Vimas Painting Company, of Lowellville, Ohio.

The FHWA did not specify the period of time it sought to suspend and debar the company and Savakis. A representative of Hercules Painting told PaintSquare News on Tuesday (May 23) that the company is in the process of appealing the suspension.

The Platt Bridge Project was a $42.7 million rehab job carried out by a joint venture of Hercules and the Vimas Painting Company, of Lowellville, Ohio. The contract was awarded by the Pennsylvania Department of Transportation, and included federal funds.

According to the Department of Transportation’s Office of the Inspector General, Savakis allegedly devised a scheme in which employees on the Platt Bridge job were paid via two separate payrolls, only one of which was reported on certified payrolls at the prevailing wage required in the contract. Employees were paid their remaining hours at a lower rate on the second, unreported payroll.

The DOT says the result of the scheme was that the joint venture kept funds that should by law have been deposited in the Welfare Fund of the International Union of Painters and Allied Trades’ District Council No. 21.

Savakis, who is listed as a resident of Merritt Island, Florida, faces federal charges of theft from a health-care program related to the alleged scheme.

The DOT’s Office of the Inspector General carried out the investigation with the assistance of the FBI, Department of Labor, Environmental Protection Agency, Homeland Security Investigations, and Internal Revenue Service.

The latest set of allegations isn’t the first trouble in relation to the Platt Bridge Project. In 2013, a Brazilian national who entered the U.S. illegally was charged with making false statements after he submitted a false name and Social Security number to the joint venture in order to get employment as a foreman on the bridge job. Daniel Prodelick was sentenced to seven months time served, one year of supervised release and a $100 fine over the scheme.

And in 2016, Rajat Verma, of Quakertown, Pennsylvania, pleaded guilty to federal charges related to a pass-through scheme on the bridge project. Officials say Verma, owner of Vertech International Inc., was subcontracted by the Hercules-Vimas joint venture to supply paint materials for the project, to the tune of $3.1 million.

The subcontract satisfied contract stipulations related to Disadvantaged Business Enterprises. Verma, who is Indian, is the sole owner of Vertech, which qualifies as a DBA.

But Verma admitted in court that the subcontract did not provide commercially useful work, and was a “pass-through” in which Vertech paid other subcontractors for the supplies, and the joint venture paid Vertech a marked-up price. Because the joint venture did that business with a DBA, it was awarded $1.97 million in DBA credit from PennDOT.

No employees of Hercules or Vimas were charged in relation to the pass-through scheme.