The opening for the new home of the National Football League’s Los Angeles Rams and Chargers in Inglewood, California, has been pushed back one year because rain has wreaked havoc on the construction schedule.

The 70,240-seat stadium originally was supposed to be ready in time for the 2019 NFL season. Media reports said Thursday (May 18) that the facility now will welcome the two teams for the 2020 NFL slate.

Record rainfall saturated the ground during the excavation phase. Nearby Los Angeles International Airport received 15.4 inches of rain from November through February.

The stadium site was filled with as much as 10 to 12 feet of standing water soon after work started on the $2.6 billion endeavor in November. Crews had to shut down the project for two months to drain the site, which at 3 million square feet will be the largest in the NFL.

Construction on the HKS Architects-designed stadium resumed in March, with around-the-clock crews working every day but Sunday.

“The continuing rains really knocked us for a loop,” Bob Aylesworth, principal in charge for the Turner/AECOM Hunt joint venture that is building the stadium, told the Los Angeles Times. “It was a very unforgiving two months for the project. And speaking from a building perspective, it really couldn’t have come at a worse time.”

The two-month delay can’t be made up over the next two years, according to developers, because the construction timetable had little flexibility.

“If this had been a one-team facility, perhaps we could have made up work or at least petitioned the league to allow some of the games of the (2019) season to be scheduled away from Inglewood,” Dale Koger, senior vice president and managing director for Legends Project Development, told the Los Angeles Times.

When completed, the stadium and adjacent performance center will be covered by a sail-shaped roof; the area covering the playing field will be made of a transparent material crafted to be as clear as a car windshield but strong enough to support a vehicle’s weight; and the design is open on the sides, which will allow breezes to waft through the structure. 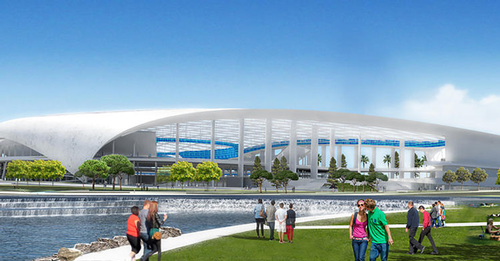 HKS Architects
The new stadium in Inglewood, California, will be the centerpiece of a 298-acre, mixed-use entertainment district, which also includes a 300-room hotel, retail and office space, and a 6,000-seat performance center.

The stadium is the centerpiece of a 298-acre, mixed-use entertainment district, which also includes a 300-room hotel, retail and office space, and a 6,000-seat performance center.

“Our focus is always on the fan experience,” A.G. Spanos, Chargers president of Business Operations, said in a statement posted on the team’s website. “Our future home will be the best stadium in the NFL and deliver a transformational experience for Chargers fans. If getting it right means pushing back the completion date, then I think the extra year is well worth it.”

The stadium is scheduled to host the Super Bowl in February 2021. League rules dictate that a new building can’t host the game in its first year.

The Las Vegas Stadium Authority on Friday (May 19) conditionally approved a lease agreement with the Oakland Raiders, which will help avoid delays for the team’s relocation for the NFL’s 2020 season.

The agreement’s approval paves the way for NFL owners to vote on ratifying the lease at their spring meetings, which began Monday (May 22) in Chicago.

The Raiders plan to break ground on the $1.9 billion, 65,000-seat domed stadium this summer.