Pittsburgh’s “Three Sisters” bridges are a landmark in the city: The triad of adjacent, identical structures are the only set of their kind in the United States. And, as Allegheny County officials learned while planning a six-year recoating and rehab project that’s underway, the people who drive, bicycle and walk across them every day want them to stay just the way they are.

The three bridges, which connect the city’s Downtown with its North Side neighborhood, near its baseball and football stadiums and the Andy Warhol Museum, were finished in 1928 and are among the first self-anchored suspension bridges built in the U.S. 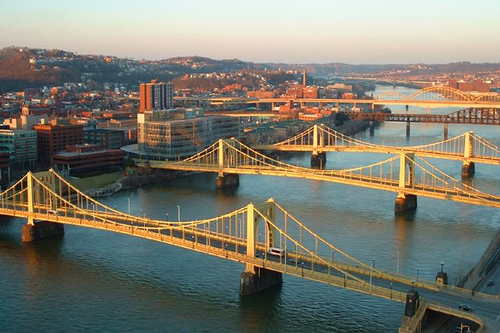 Images: Allegheny County
The "Three Sisters" bridges in Pittsburgh, a triad of adjacent, identical structures, are the only set of their kind in the United States.

Built by the American Bridge Company (headquartered in nearby Ambridge, Pennsylvania), the bridges were originally known as the Sixth, Seventh and Ninth Street Bridges, but in the 1990s they were renamed for Roberto Clemente, Andy Warhol and Rachel Carson, respectively, to honor famous Pittsburghers. They were built under the guidance of the county, and remain county-maintained structures.

Last recoated in the early 1990s, the Three Sisters are undergoing a major rehab, including the removal of lead paint that was overcoated but not removed during the previous paint job. The Andy Warhol Bridge is in the midst of its rehab, which began in 2016 and is expected to wrap up this year. The Rachel Carson will be next, in 2018-19. The Roberto Clemente Bridge, which leads directly to PNC Park, the home of Major League Baseball’s Pittsburgh Pirates, is planned for work in 2020 and 2021.

The Warhol job is a $25 million project, with 80 percent of its funding coming from the federal government. (Of the remainder, 15 percent is from the Pennsylvania Department of Transportation, and 5 percent is bankrolled by Allegheny County.) The prime contractor on the job is Brayman Construction; the county is working with engineering firms Michael Baker and L.R. Kimball for the design aspect of the three-bridge job. Brayman subcontracted the painting work to Southern Road and Bridge, according to a Brayman representative.

The construction work for the subsequent two rehab jobs will bid separately.

While the bridge will remain the Aztec Gold color that it and the other two sister bridges have been since the early 1970s, officials say it was almost … silver.

And it would have been OK—the color, being a more recent change, isn’t considered historic, explains Michael J. Dillon, the county’s deputy director of engineering and construction. But a public survey conducted with the help of the county’s communications department put a halt to any plans for change.

“It was overwhelming—I think about 85 percent wanted to keep the colors the same,” Dillon says. “We would’ve been allowed to change the colors, but from the input we received from the public, we decided to keep (Aztec Gold).”

Crews will paint the lampposts on all three bridges black during this project, a nod to Pittsburgh's black-and-gold sports teams. (The Clemente Bridge already features black lampposts.)

According to Allegheny County Public Works Director Steve Shanley, the bridges will be painted with a three-coat, zinc-based system selected in accordance with PennDOT’s Publication 408 and Bulletin 15.

There have been some challenges during the coating of the Warhol Bridge, the first of the three to undergo work. One involved clearance: Containment and access systems had to be used but couldn’t hang down too far because the city’s riverboat fleet crosses under the bridges regularly, without much vertical leeway.

The Three Sisters “are actually the lowest clearance bridges on the Allegheny River; they’re about 41 feet from the elevation of the river to the bottom of the bridge,” explains Dillon. “The Gateway Clipper boat itself is about 39 feet. So it’s a very, very restrictive window that we had that we could put our underdeck shielding on and still maintain river traffic.”

The interesting thing, Connors notes, is that once upon a time, the bridges had about 10 feet more in the way of clearance.

“When they started building locks and dams on the three rivers, the river went from elevation 700 to 710,” Connors says. “So there used to be 50 feet of clearance, but now there’s about 40. We still have enough [for river traffic], but there used to be more.”

Another challenge? Coordinating so traffic headaches in the center of town aren’t exacerbated during work. The Three Sisters connect Pittsburgh’s Downtown, where major corporations including PPG Industries, U.S. Steel and PNC Financial Services are located, with a major entertainment district on the city’s North Side.

“We’ve had meetings in the past with the Pirates and the (the National Football League’s) Steelers, and the Port Authority (transit agency), because the bridges are heavily bus trafficked,” explains Connors. “Also, on certain Fridays in the summer, the city and the Pirates close Federal Street and the Clemente Bridge to traffic, so we don’t want to create a big traffic jam. That’s why we’re saving these three projects for different years.”

Ten bridges connect Downtown Pittsburgh, which sits at the confluence of three rivers, with the surrounding areas. On the district’s southern border, the state-owned Liberty Bridge remains under construction after last year’s jobsite fire that melted a compression chord, necessitating major repairs.

A little further up the Monongahela River, Allegheny County’s 10th Street Bridge will be undergoing a repainting job later this year. The nearby Birmingham Bridge just underwent a major rehab, and the Smithfield Street Bridge, also on the southern edge of Downtown, is scheduled for work in the coming years.

“We don’t want to do them all at one time," Connors notes. "But when funding becomes available, you do want to do your projects."