With only weeks left to submit an entry for Durability + Design’s inaugural Elevation Awards, we will be counting down to the deadline (May 26) by featuring a select nomination each day, giving you a glimpse of the competition. Below is a selected nominee in the “Public Buildings” category. 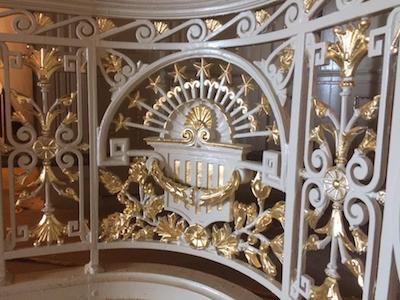 Photos: The Gilders' Studio Inc.
The Gilders’ Studio Inc. worked alongside Olin Conservation Inc. to restore century-old gilding in the library of the Eisenhower Executive Office Building in Washington, D.C.

The State Library, originally constructed in the 1870s, had gone through many transformations over the years. At first painted a pearl color with gilded highlights, it had undergone several color schemes, including orange and brown. Its use had also changed, at one time being an office space for the Secret Service.

In 2015, it was decided the space would go back to its original use and look, so the team began its research and made over 200 exposures on all facets of the space’s decorative elements.

With historic photographs as reference, paint was used to replicate the old “pearl” color of the original. Nine members of the Studio prepared, sized and applied a layer of 23-karat gold leaf to over 72,000 individual elements, which took about two months, and in some areas full fall protection was required.

In addition to the conservation of the ceiling and new gilding, the project also consisted of the re-installation of refurbished gaslight fixtures and the cleaning and restoration of the original Minton tile floor.

If you or one of your clients completed an exceptional project between Jan. 1, 2016, and March 1, 2017, be sure to get your nominations in the running at www.durabilityanddesign.com/elevation.