Last week, members of the International Union of Painters and Allied Trades gave back to their communities as part of the union's Community Day of Action.

According to the union, more than 2,000 IUPAT member volunteers took part in projects throughout the U.S. and Canada to fix up and paint community fixtures including churches and schools, and collected food for those in need, as part of the second annual event. Projects took place in nearly every state and province, according to an IUPAT spokesman. 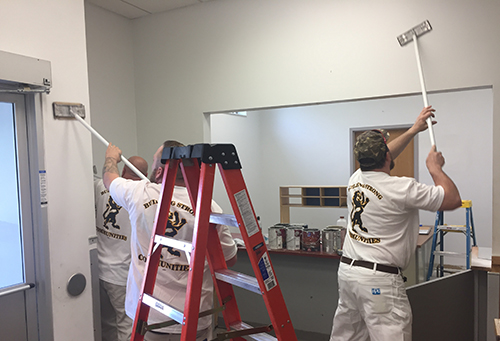 Photos courtesy of IUPAT
More than 2,000 IUPAT members took part in Saturday's Community Day of Action, according to the union.

With the annual community event, IUPAT aims to highlight the role of unions not only as advocates for works in relation to wages, benefits and workplace safety, but as organizations that give back to the community around them.

Events Across the Continent

Industry partners and IUPAT district councils offered supplies for the volunteer groups as they gussied up community centers from Halifax to Hawaii.

"It is our hope that the work we have done today, coast to coast in the United States and Canada, will inspire others to do their part for our communities," said IUPAT General President Kenneth Rigmaiden.  "I'm proud of our members who have dedicated their time, their skills and their hearts to such worthy causes, and I truly believe that we made a difference.”

“My thanks to our community partners for helping us make our second annual Community Day of Action a success,” Rigmaiden added.