Coatings manufacturer PPG Industries (Pittsburgh, Pennsylvania) has made a third attempt to combine with AkzoNobel (Amsterdam), and for the first time, the Dutch company has said it will consider the offer.

PPG submitted its latest proposal—which it called “one last invitation” to AkzoNobel’s boards to reconsider their stance on the merger idea—early Monday (April 24) and, in a break with its previous, private approach, published the entire letter on its website. 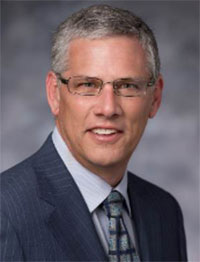 PPG
PPG Chairman and CEO Michael McGarry has extended what he called the company's "last invitation" to Dutch coating company AkzoNobel to consider a merger.

The new proposal comes in at 96.75 euros per outstanding ordinary share of AkzoNobel, bringing the total offer to about $28.8 billion. PPG’s first and second offers, of $22.8 billion and $26.3 billion, were both rejected out of hand by AkzoNobel.

PPG, with total sales of $14.8 billion in 2016, is the largest coatings company in the world. AkzoNobel is considered to be the second-largest. PPG’s offer refers to the proposed deal as a “merger agreement,” rather than an outright acquisition.

While AkzoNobel swiftly and publicly rejected the first two offers from PPG, the company’s response to the third offer was more neutral. In a press release issued Monday, AkzoNobel confirmed receipt of the offer and said, “In accordance with its fiduciary duties and acting under the Dutch governance code the Board of Management and Supervisory Board of AkzoNobel will carefully review and consider this proposal.”

PPG argues that its new proposal for AkzoNobel is “vastly superior” to AkzoNobel’s plan to split into two companies, which the company unveiled last week. AkzoNobel’s scheme would involve spinning its Specialty Chemicals business into its own company, separate from its Decorative Paints and Performance Coatings businesses, which would remain together.

AkzoNobel says the plan would save money and would come with “considerably less risk and significantly lower social cost” than a merger. PPG, however, argues the opposite, saying risks inherent in AkzoNobel’s plan include the fact that it “creates two smaller, unproven companies with uncertain market valuations,” “requires substantial restructuring,” “potentially decreases free cash flow” and “potentially requires a regulatory review that would extend the timeline and create uncertainty.”

In addition to the increased dollar value, PPG’s new offer addresses some of the less tangible factors AkzoNobel had pointed to when it rejected the company’s earlier offers. The letter from PPG Chairman and CEO Michael McGarry to AkzoNobel CEO Ton Büchner and supervisory board chair Antony Burgmans outlines a “commitment to maintaining AkzoNobel’s strong ties to the Netherlands” and “significant commitment to research and development.”

PPG also promises that, were a merger to occur, the new, combined company would keep and emphasize many of AkzoNobel’s brands, such as Dulux, Sikkens and International Paint.

History of the Deal

Talks about a merger between the two companies began in March, and have at times been contentious. PPG twice brought unsolicited offers to AkzoNobel privately in March, and both times, AkzoNobel responded with press releases outlining its outright rejection of the offers.

After the second attempt, PPG made a public appeal to the Dutch company to reconsider. At the same time, AkzoNobel shareholders, led by hedge fund Elliott Advisers, attempted to engineer the dismissal of board chair Burgmans. AkzoNobel responded by reiterating its confidence in Burgmans, and questioning the relationship of Elliott and PPG.

In another blockbuster industry transaction, The Sherwin-Williams Company is expected to complete its $11.3 billion acquisition of Valspar by late June. Valspar agreed earlier in April to sell its North American industrial wood coatings business in order to satisfy regulatory concerns over the deal.