Coatings manufacturer AkzoNobel (Amsterdam) announced what it called record profitability in the first quarter of 2017, and went on to detail its plan to spin its Specialty Chemicals business into a separate entity, in a series of announcements to shareholders Wednesday (April 19). 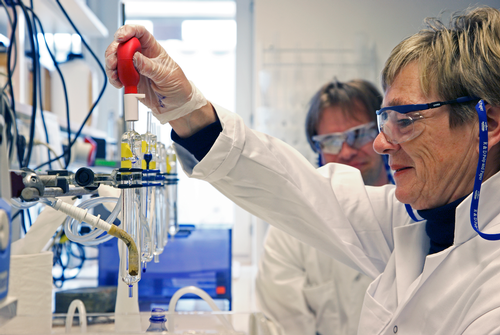 Images: AkzoNobel
Before AkzoNobel detailed the plan to separate is Specialty Chemicals operation into an entirely different entity, it shared the unit's positive numbers.

The company also highlighted its commitment to ramping up its sustainability agenda, reiterating a recently announced goal to use 100 percent renewable energy, becoming carbon neutral by 2050.

The company’s EBIT was up 13 percent at 376 million euros (about $403 million)—up from 334 million euros in the same period in 2016. Reuters analysts had estimated the Q1 figure to be more like 337 million euros. The company called it a “record Q1 profitability.”

Revenue was up in all areas of business and 7 percent overall, due to higher volumes and acquisitions, the company said. Those higher volumes were up by 4 percent, driven by Decorative Paints and Specialty Chemicals.

The business area that showed the most growth was the Decorative Paints unit. Along with the 7 percent revenue hike, volumes were up 9 percent with positive developments in all regions. EBIT increased by 48 percent, mainly because of higher revenue and continued focus on cost measures, the company said.

Performance Coatings also saw growth, but landed at the bottom of the spectrum in the quarter with a 6 percent increase in revenue and EBIT up 1 percent. The company says the revenue increase was driven by the acquisition of BASF’s Industrial Coating business and that there was positive development in segments including Industrial and Powder Coatings and Automotive and Specialty Coatings.

AkzoNobel fleshed out its plan to separate the Specialty Chemicals business and announced that the result would be a 1.6 billion-euro payout to shareholders in extra dividends this year.

The plan is to sell or list the chemicals business (which accounts to about a third of sales and profits) within the next year as project teams are already in place. According to Reuters, analysts have valued the division at approximately €8 billion, based on the company’s 2016 operating profit of 629 million euros.

The company estimates about 150 million euros in annual savings from its continuing improvements to Paints and Coatings programs plus an additional 50 million euros in savings expected from the separation of the Specialty Chemicals line.

When pressed at the subsequent press conference on how these savings would translate to job stability for the company’s workers, CEO Ton Büchner declined to comment citing that in the company’s history it has always discussed personnel decisions internally before talking to the media, adding on at the end a reminder that the plan is focusing on growth.

AkzoNobel said it estimates that its 2017 EBIT will be around 100 million euros ahead of 2016 due to growth momentum across all platforms, and reiterated the increased shareholder returns generated from the separation plan, which included:

The separation of the Specialty Chemicals business has been talked about for some time, but the formal announcement on Wednesday was seen as a response to rival PPG Industries’ (Pittsburgh, Pennsylvania) repeated attempts at a takeover, though the ongoing merger saga wasn’t directly referenced.

“The Supervisory Board believes that management’s plan for AkzoNobel’s future will deliver superior shareholder value compared to the alternatives,” said Antony Burgmans, Chairman of the AkzoNobel Supervisory Board. “It will be delivered by a competent, experienced management team with a proven track record at a faster pace, with considerably less risk and at significantly lower social cost.”

PPG issued its own statement after the press conference, saying that AkzoNobel’s plan is not less risky and is, in fact, just the opposite.

“PPG has listened carefully to AkzoNobel's new strategic plan, and we continue to believe in the merits of combining the two companies,” according to the statement. “PPG believes that AkzoNobel’s new strategic plan will be more risky and create more uncertainty for AkzoNobel stakeholders including employees and pensioners, as Akzo's revised strategy would create two smaller, unproven companies and result in additional restructuring.”

Büchner pointed to the global numbers, however, and said that AkzoNobel—the world's second-largest coatings company, behind PPG—is an industry leader, and the company’s track record, especially recently, shows consistent profitability and growth.

“Now is the right time to create two focused, high-performing businesses,” Büchner said. “This strategy will create substantial value for shareholders with significant less risks and uncertainties compared to alternatives. We believe our long-term focus in sustainability creates value for all stakeholders, including our shareholders, customers and employees.”

In the plan presentation, it was noted that shareholders had responded positively to the separation details. Büchner was asked to expand on that during the question-and-answer period, and whether he thought any of the players who are in favor of talks with PPG have changed their minds. He said that, while the reaction was, indeed, positive, that was just the first impression and that the company intends to have more in-depth talks with all shareholders about their concerns and thoughts in the near future.