While construction has enjoyed technological advancements and has rapidly increased productivity, using and improving upon robotics to complete complex tasks is still gaining traction. 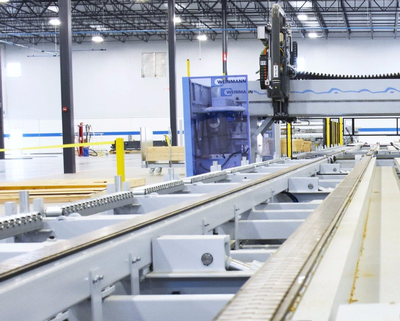 Blueprint Robotics
Robotics use will be limited to repetitive tasks, such as quickly finishing needed work in transportable, luxury modular homes.

Robots are performing work in capacities such as demolishing and scaffolding, however, their use is limited to repetitive tasks, such as quickly finishing needed work in transportable, luxury modular homes.

There is some concern about automation stripping jobs from the workforce, but companies in the robot business say they have helped ease a labor shortage, which has hampered construction of residences and commercial properties across the United States.

High-tech plants equipped with robotics allow developers to fill the gap by having houses and apartment buildings manufactured off-site, for less money and in a fraction of the time.

Cyndicy Yarborough has no background in construction, but at Blueprint Robotics in Baltimore, she works in a factory that builds houses like cars—on an assembly line. Robots fire thousands of nails into studs each day and never miss.

Yarborough operates a machine that lifts floors and walls and packs them onto a flatbed truck. It’s the final step before delivery to a development site, where they’ll be pieced together.

Workers make about $15-20 an hour in rural Pennsylvania. That compares with the $50-100 an hour they make  in markets such as New York’s Hudson Valley and the Washington, D.C., area, where many of Champion’s modular homes are shipped.

Champion Commercial and modular construction are changing the construction industry by solving for labor shortages. https://t.co/eG5L9eC39P

Kris Megna is a builder who works with Champion to create houses as large as 10,000 square feet in the pricey suburbs of Boston. Megna, who founded Dreamline Modular Homes in 2010, said almost any custom design is possible, even though the modules can’t be much bigger than 60 feet by 16 feet.

Walls between sections can be knocked down for open-concept kitchens, and cutouts can create vaulted ceilings, he told Bloomberg News.

“The house is 60 percent complete when it arrives, and that means 60 percent of the headaches of building are gone,” Megna said.

In December, Marriott opened a Fairfield Inn in Folsom, California, with 97 rooms, which were pieced together at a plant in Boise, Idaho. In March, a collection of Marriott hotel rooms was getting wood-framed walls and ceilings at a Champion Homes factory in Liverpool, Pennsylvania. Even the beds and televisions will be in place.

The boxes will be shipped through stretches of highway and stacked in Chapel Hill, North Carolina, next month.

“What we like is how well modular is built,” Khalifa told Bloomberg. “These things have all been designed to be transported. They have the integrity of a shipping container.”

Robotic innovation has also found a foothold in other jobs, though also on the more repetitive side of the industry.

Scientists at Nanyang Scientific University in Singapore have developed a robot that can spray-paint the interiors of industrial buildings.

PictoBot was co-developed with JTC Corporation (JTC) and Aitech Robotics and Automation. Its creators say it can save time and manpower, along with improving safety.

The developers note that PictoBot can paint a high interior wall 25 percent faster than a crew of two painters. It can work four hours on one battery charge, give walls an even coat of paint that matches industry standards and use advanced sensors to operate in the dark to enable continuous 24-hour painting.

Although the worry automation stealing jobs still lingers, some markets that have the worst construction labor gap—such as Austrailia and Japan—are finding it necessary to hustle with their experimentation with robots.

Japan, which is set to host the 2020 Olympics, lacks the skilled workers to even operate heavy machinery, and needs more than 25,000 workers to build the stadiums, arenas and other facilities it needs to host the event.

The Khaleej Times reports that because of this, rapid robotic growth in the industry is expected within the next five to 10 years.

"Construction companies building very large and complex projects will adopt semi-autonomous and autonomous robotic systems in the near future that will solve construction problems, increase productivity, reduce cost and increase safety at the sites."