Entrepreneur Bob Dahlstrom has a plan to reduce the safety risks inherent in many industrial coating application scenarios—and his plan involves paint that flies.

Dahlstrom is the founder of Apellix, a startup company that’s putting drones to work in the coatings industry and beyond. Based in Jacksonville, Florida, the company has been rolling out its first market product, a drone-based dry film thickness gauge called Smart Bee, and has plans to release Worker Bee, a painting drone, by the fourth quarter of 2017. 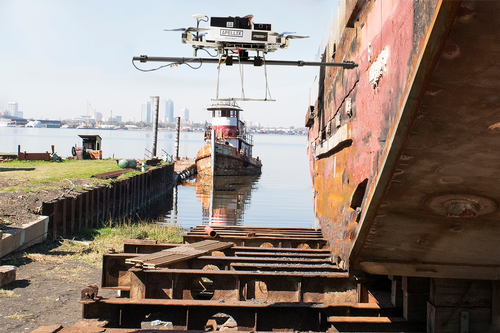 Apellix
Florida startup Apellix has plans to release Worker Bee, a painting drone, by the fourth quarter of 2017.

While he has some limited experience in the painting industry, Dahlstrom’s background is as an entrepreneur working with software—his previously established company is in the Internet security business. He came to drones through that channel: “I essentially say that a drone is a flying computer, and a computer is basically software,” he explains. His oft-repeated mantra: “Drones are software.”

The idea of a drone that paints came to him when he was painting his own house. “I was putting scaffolding up, I was dragging equipment up and down a ladder, my neck was sore, my back hurt, and I realized, I’m not in college anymore!” he says, alluding to a painting job he held during his younger years. “I thought, ‘There’s gotta be a better way!’”

The key problem Apellix had to solve in order to make a painting drone work was one of physics: How could a small, propeller-driven drone carry paint into the air in order to apply it?

“Paint’s really, really heavy, and drones only last 20 minutes to a charge,” he notes. “With that weight, it might only last 10 minutes. That’s not going to work, other than for touch-ups.”

A cord attached to the drone carries paint to the unit from a tank situated on the ground. The compressor, on the ground, pumps the paint up to a smaller reservoir on the drone, where the nozzle applies the coating. The tether also includes a cord to carry power to the drone, so that it doesn’t have to be recharged over and over during the job.

“What we’re doing is basically more complicated than rocket science,” Dahlstrom says. “There’s a reason why, in aviation history, helicopters just had the one lift and a rotor on the back for turning: You’re basically flying a brick.” Through complex computing, though, “we’re almost defying physics by lifting this brick into the air and having it do things.”

Dahlstrom says the bulk of what he wants to do with Apellix, at least early on, involves using drones in industrial coating application situations where human operators might be in a risky situation, or might have trouble reaching the substrate to be coated.

“We’re not coming out with a house-painting or building-painting drone, until maybe way down the road,” Dahlstrom says. “Right now, we’re concentrating on industrial painting.”

“We’re a safety company,” he goes on. “I was told by a CEO of an oil and gas company who’s been in the business for 30 years, ‘Bob, I’ve had to tell five mothers that their sons are never coming home again.’ So if we can put a robotic system up and increase safety to where those conversations don’t have to happen—that’s cool.”

Dahlstrom says jobs like the coating of flare stacks for oil and gas processing plants are ideal for the Worker Bee, because of the difficulty and danger of reaching the surface. The use of the drone is a value add in such situations, he says.

Apellix has been working with industry partners to test the Worker Bee and optimize it before it goes to market.

Right now, he says, the company has been applying latex paints, using a 3,300 PSI airless spray system. The company is also beginning to experiment with a 7,600 PSI system, he says, as well as zinc-rich coatings and coatings that contain antifouling agents.

The model currently in use, the Worker Bee 1500, handles up to 15 pounds of paint at a time, and reaches up to three stories, Dahlstrom says. Another model in development would lift 55 pounds—the upper limit that a drone can currently carry under FAA rules.

The Smart Bee dry film thickness reader is currently available via a reserve system; rather than buying the equipment outright, clients can reserve a drone, then return it after a set period of time for a new one. According to Apellix, the Smart Bee can also be used to measure surface profile.

One Drone, One Operator

For those who worry that drone-based paint application might take away jobs in the painting industry, Dahlstrom disagrees.

“We don’t think it is,” he says. “What we’ve done is, we’ve made an extension of the painter. Where before, they might have had to stand up on something and spray by hand, now they’re standing on the ground, and there’s an extension up there that sprays.”

“By current FAA regulations,” he adds, “you have to have a person there operating the drone. You can’t operate without one person per drone currently, without having some special permits from the FAA.”

“With the backlog of infrastructure that needs coating and painting and help, this is something that’s going to take decades to work through,” Dahlstrom says. “Even if someone using our system is far more productive, there’s still going to be tons of things to paint. I don’t see this as taking away jobs; I see it as adding jobs.”

While Apellix hopes to have the Worker Bee to market by year’s end, the company is currently seeking more industry partners with challenging paint-application needs who would like to explore bespoke solutions involving the painting drone. While the company is focusing right now on larger, flatter, easier-to-coat surfaces, he says it hopes to work toward tackling more complex jobs in the near future.

Potential partners can reach the company at: info@apellix.com.