First Gaudí-designed House to Open as Museum in Barcelona

Beginning this fall, Barcelona's Casa Vicens will be open to the public in museum form. The building was, until recently, a residential or private space for over 100 years, and is notable for having been the first house designed by famous Spanish architect Antoni Gaudí.

In the late 1800s Barcelona broker Manel Vicens commissioned Gaudí to design and furnish the house, which is considered to have ushered in the era of architectural modernism in Barcelona. The structure remains as a freestanding building in the midst of a compact wall-to-wall neighborhood. 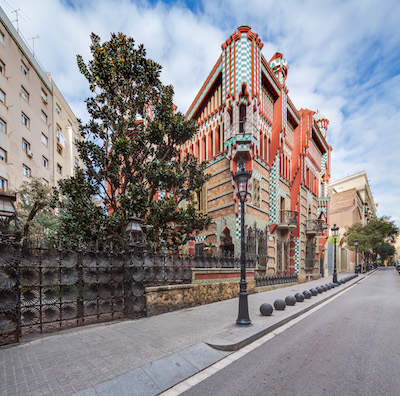 Photos: Pol Viladoms / Casa Vicens
Casa Vicens remains as a freestanding building in the midst of a compact wall-to-wall neighborhood.

“The house is built following Catalan construction traditions, which the architect interpreted in unexpected ways, while he also incorporated decorative and symbolic elements, also in his highly personal way,” according to the museum’s website. “As a whole, it heralds and displays the creative freedom that would become the hallmark of his entire future oeuvre.”

In 1899 the Vicens sold the house to the Herrero-Jover family, which resided there up until 2014, when Amura Capital—a subsidiary of the Andorran MoraBanc—purchased the property.

Casa Vicens was enlarged in 1925 by architect Joan Baptista Serra de Martinez, and while the work stayed true to Gaudí’s design, certain aspects of the enlargement are now being removed in preparation for the public use. This is the eighth building in Barcelona listed as a UNESCO World Heritage Site and the last to be opened to the public.

Architecture studios Martínez Lapeña-Torres Arquitectes S.L.P. and Daw Office S.L.P. have taken up the rehabilitation and restoration of the space along with joint venture Calaf AMC5. The bank has also hired several cultural professionals to oversee the project.

“Casa Vicens is the first Gaudí masterpiece,” said Mercedes Mora, the executive manager of the estimated $2.45 million project that began in 2015.

The main goal of the project is to showcase the house in its original glory, so the spaces designed by Serra de Martinez will mostly serve as visitor spaces and complement the tour. A staircase that the enlargement dismantled will also be rebuilt.

The ground floor will be a welcome area, while the first and second floor will become permanent exhibitions. The basement will house a bookstore and a café will be built at the end of the garden.

The project is also working in conjunction with the District of Gràcia and Department of Tourism of Barcelona Town Hall to develop a Tourist Impact Plan. It is estimated that 150,000 people will visit the museum each year with the price of admission between 12 and 22 euros.