The Philadelphia Museum of Art has begun “unclogging its arteries” with the recent groundbreaking of the Core Project—a $196 million plan that will add a grand total of 90,000 square feet to the 100-year-old museum. 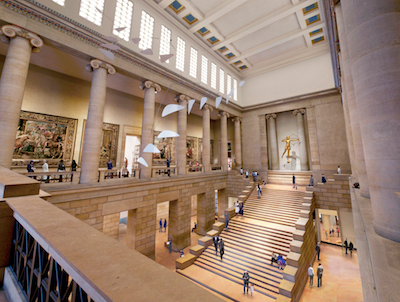 Architectural renderings: Gehry Partners LLP and KX-L
The construction will involve the removal of the museum’s auditorium, opening up a new main, multi-level space intended to be called “the Forum,” which will serve as a place for public gathering.

Gehry’s plan, essentially, is to open everything up, keeping in line with the classicism with which the building was originally constructed (he referenced the original firms Horace Trumbauer and Zantzinger, Borie and Medary, who designed the building in the 1920s).

"[Trumbauer and ZBM] left an incredible architectural legacy," Gehry said during the groundbreaking. "The DNA, the bones of this place are really fantastic for the present and the future. … It just showed us the way to make it all work. We had to uncork a few cloggy arteries and clarify."

In a video clip associated with the museum’s press release on the construction, museum officials noted the need for a more open space, infrastructure improvements and basic reorganization.

Gehry was approached by former museum director Annie d’Harnoncourt in 2006 for the project following his success with the Guggenheim Museum in Bilbao, Spain. He recalled that she asked him to do the same thing, except with the restrictions of only working on the inside.

The construction—managed by LF Driscoll Company LLC—will involve the removal of the museum’s auditorium, opening up a new main, multi-level space intended to be called “the Forum,” which will serve as a place for public gathering. A new staircase will pass through and connect visitors to the 640-foot-long vaulted walkway above, which has been closed to visitors for decades.

The west terrace will be rebuilt to integrate ramps the north entrance will be reopened. Also being added into the interior are new classrooms, art studios, a restaurant, café, meetings rooms and new art galleries.

The Core Project is the second part of Gehry’s three-phase Facilities Master Plan. The first project was a new Art Handling Facility, which was completed in 2012. The next phase involves converting the attic for public use. 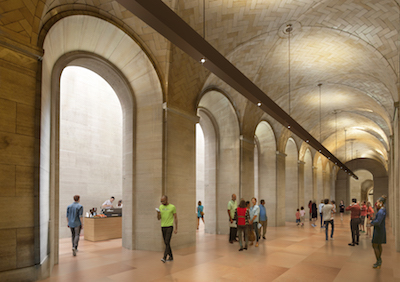 A new staircase will pass through and connect visitors to the 640-foot-long vaulted walkway above, which has been closed to visitors for decades.

The Master Plan is part of a bigger effort in the “It Starts Here: Campaign for the Philadelphia Museum of Art,” which will allow the museum to “achieve ambitious goals in education and public programming, improved access and community outreach, and the innovative use of new technologies to fulfill its mission and more effectively engage the next generation of audiences, locally as well as internationally,” according to the press release.

The fundraising campaign is the largest in Philadelphia’s history, according to the museum, and so far, it has raised $326 million of its $525-million goal.

The Core Project is expected to take about three years to complete, with the new spaces to open in phases as they’re finished until Fall 2020. The museum will remain open to the public throughout the whole construction process.