The opening of Atlanta’s $1.5 billion, LEED Platinum designed, Mercedes-Benz Stadium could be delayed for a third time because of the project’s one-of-a-kind retractable roof, officials say.

The National Football League's Atlanta Falcons had been notified by the Georgia World Congress Center Authority (the stadium’s owners) that the roof of their new home turf was being “evaluated” again, the Atlanta Business Chronicle first reported March 28. The owners gave a 10-day timeline for when project timelines would be updated.

So far, though, the slated opening date of June 30 is still in play.

“No announced event dates have been changed, and work is moving forward at a rapid pace,” said Steve Cannon, CEO of the Falcons’ parent company AMB Group. “Many areas of the building are finished, and others are nearing completion. We are routinely working through the construction timelines with our partners, and with any building this size, scope and complexity, adjustments to construction timelines are expected.” 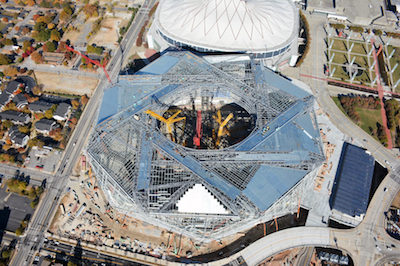 HHRM/Aerial Innovations
The Georgia World Congress Center Authority (the stadium’s owners) indicate that the roof is being "evaluated," reports say.

The complexity of the roof design has already delayed the opening twice, as the stadium was first slated to open on March 1, and was pushed to June 30.

The structure of the roof is the first of its kind and consists of eight metal panels—or “petals”—that will open simultaneously in under 10 minutes, officials say, and was designed by international architecure and engineering firm HOK (St. Louis, Missouri), in collaboration with tvsdesign, Goode Van Slyke Architecture and Stanley Beaman & Sears.

“Our roof is one of the marquee design elements of our stadium,” said Scott Jenkins, the stadium’s general manager and chairman of the Green Sports Alliance. “Inspired by the oculus in the ancient Roman Pantheon, the eight-petal roof opens and closes like the aperture of a camera and is a major shift from the kinetic roofs of past sports facilities. The petals are clad with clear ETFE-fabric so that even in the closed position you have natural light coming through and the sensation of an open-air stadium.”

The specialized roof is just one facet of how the Mercedes-Benz Stadium will be the first NFL and Major League Soccer stadium designed to achieve LEED Platinum certification (the Sacramento Kings’ Golden 1 Center achieved the honor of first ever certified indoor sports venue).

“We can actually ventilate the building, so we don’t need mechanical heating and cooling for the majority of our football games,” Jenkins said.

Under general contractor HHRM JV (a joint venture of Holder Construction Company, Hunt Construction Group, H.J. Russell & Company and C.D. Moody Construction Company), it will be the first stadium to earn every water credit available among the 80 it needed to reach the Platinum level. The project design includes a 1.1 million-gallon storm vault and a 680,000-gallon cistern to collect water.

All that recaptured water will be reused and irrigated for the landscape (which includes edible plants that will go to the community) and cooling towers.

Moreover, 4,000 solar panels will allow the stadium to use nearly 30 percent less energy than a regular sports venue, and its construction has maintained a nearly 80 percent diversion rate of its waste.

“Innovation is an integral part of our society and as the sports industry continually looks for ways to improve—sustainability is a great field to innovate,” Jenkins said. “We’re happy to lead the green initiative to inspire future sports venues, however, we want to go beyond that and motivate our Falcons/United Family, the citizens of Atlanta, and people across the world to lead a more healthy and eco-friendly life.”

All of the extras that go into erecting the innovative structure make it a “complex building,” which is what the officials pointed to when the initial delay was announced last year.

According to last official status report from the owners on Feb. 28, the roof was right on track and installation would continue over the next 30 days. If the authority sticks to its estimated 10-day window, an update on the roof and the stadium’s opening is expected by April 8.

Editor's note: This story was upated at 10 a.m., April 6, to include architect and general contractor information.