After nearly four years (with a few delays along the way), "Bertha," Seattle’s giant tunnel-borer, has broken through to the other side, completing its 9,270-foot journey under the city.

Bertha, the world’s largest tunneling machine, was built by Japanese manufacturer Hitachi Zosen, and has been operated by Seattle Tunnel Partners, the design-build contractor overseeing the Alaskan Way Viaduct Replacement Program. The machine broke through at the tunnel’s north end on Tuesday morning (April 4).

The project will replace the Alaskan Way Viaduct—a stretch of SR 99 in the city that is subject to risk from seismic activity—with a new route that includes a nearly 2-mile-long tunnel. The project began after the 1950s-era viaduct structure sustained damage from a 6.8-magnitude earthquake in 2001.

The borer began its journey in July 2013, but Bertha’s wheels came grinding to a halt that December after about 1,000 feet of tunneling. At first, officials thought it had been impeded by a steel pipe, an assertion STP still holds. But government officials have since argued that dirt had gotten into a bearing, unrelated to any pipe in the way, overheating the machine and damaging its seal system. Hitachi Zosan had to remove the machine and perform repairs that took nearly two years.

Once Bertha got going again in December 2015, it made quick progress, covering 8,000 feet in 15 months, with only minimal stops for maintenance and rest.

The project—which, overall, is slated to cost about $3.14 billion—has been fraught with legal wrangling, especially in the wake of Bertha’s 2013 breakdown. STP, the state of Washington and the city of Seattle have dueling lawsuits pending, worth hundreds of millions of dollars.

STP’s suit against the state claims that an abandoned pipe caused the breakdown, and seeks damages of $480 million related to the repairs to the machine and time lost during the two-year fix time. The city of Seattle is suing STP for $81 million related to damage incurred because of sinking in the city’s Pioneer Square area, which the city says stems from groundwater removal related to the tunnel.

How Bertha Did It

Bertha, with a diameter of 57 feet, was designed specifically for the ground conditions under Seattle, according to the Washington State Department of Transportation. As the borer moved, it pulled pieces of precast concrete into place behind it, creating the tunnel structure. Crews have been working in the areas further back, creating the double-deck roadway inside it. 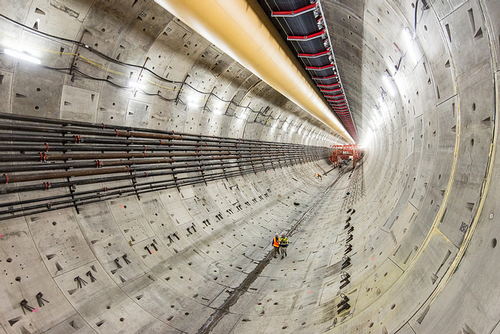 Photos: WSDOT
As the borer moved, it pulled pieces of precast concrete into place behind it, creating the tunnel structure.

Some maintenance work involving the removal of cutting tools from the head of the borer had to be done in hyperbaric conditions, according to WSDOT, requiring crews to seal up the ground in front of Bertha with bentonite clay, then overpressurize the work area with compressed air.

Now that its mission is complete, the Seattle Times reports, Bertha will be almost entirely scrapped and melted down for reuse. The only parts eligible for recycling as-is, the paper says, are “generic parts such as hoses, belts, wires.”

The 2-mile tunnel created by Bertha will connect at its south end with a 1-mile stretch of highway and an overpass that will guide vehicles over train traffic south of the tunnel. As part of the project, an off-ramp is being constructed of materials touted as "earthquake-proof," including rebar made of a nickel-titanium shape-memory alloy that returns to its original form after being stressed.

The Alaskan Way Viaduct will be demolished as part of the project, and a new surface street along the waterfront will be created, along with a waterfront park.

The $3 billion bill for the job is being footed largely by state gas taxes, along with other state funding. The Federal Highway Administration is contributing $787 million, and the local government and Port of Seattle have chipped in as well.

The tunnel will be tolled, which will account for $200 million of the construction costs, per the Washington legislature. Future tolls will also be used for maintenance of the tunnel once it is in use.

The tunnel is expected to open by the beginning of 2019, more than four years later than its original intended completion date.