A liquid pipeline that travels under Michigan’s Straits of Mackinac has been the subject of a great deal of debate in that state in recent weeks, after a local newspaper uncovered documents it said indicate the presence of areas of coating failure.

Enbridge Energy’s Line 5 is the subject of a report first brought to light by the Petoskey News-Review, put together by Enbridge for the Environmental Protection Agency as part of a federal consent decree stemming from past incidents. The report describes a proposed plan for inspection and maintenance of the 60-year-old Line 5, which carries oil and natural gas liquids. 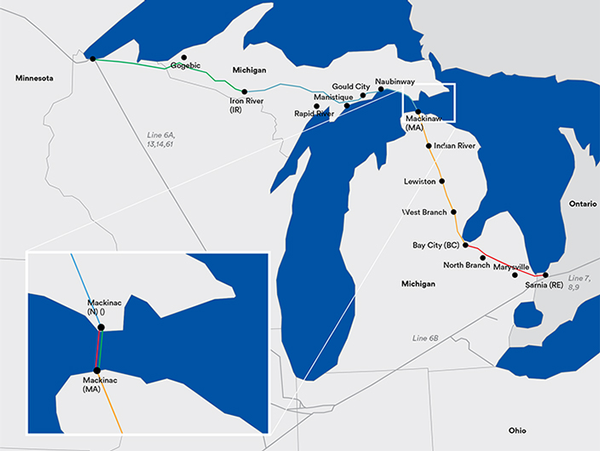 The report proposes providing visual surveys and collection of biotic samples, correlated with “the limited numbers of areas of the pipeline where there is a loss of coating around the pipe “holidays”). “One sampling site per zone has been designated on the east pipeline, with three of the sites coinciding with holiday areas.”

When that report was first published, an Enbridge representative told PaintSquare News that the report was a study, not a description of the current state of the pipeline. “The pipe is in good condition and the fiber-reinforced enamel coating is intact,” Enbridge reported. “We are conducting another study and the document contains things that we will look for; they do not exist today.”

“To date, all tests have shown the fiber-reinforced enamel coating is strong,” the company said. “There is no corrosion anywhere along Line 5 in the Straits and the pipe is in good condition.”

Doubts lingered as more news outlets picked up the story of the report, however, and subsequent news raised more questions about the 30-inch pipeline and twin 20-inch pipelines that it splits into.

Michigan news source MLive reported March 12 that a newly released report from Edward Timm, a retired Dow Chemical engineer and expert in fluid dynamics and pipeline external corrosion, asserts that “certain sections of the twinned sections of Line 5 under the Straits may be only one peak current event away from catastrophic failure.”

Timm’s report revolves around the idea that the currents in the Straits, at the level where the pipeline is, are stronger and more complex than the designers of the line realized when it was built in 1953. He also calls into question the coating system that Bechtel, which built the pipeline, chose at the time.

“The coating system used on Enbridge Line 5 under the Straits of Mackinac would not have been considered to be the best available practice in 1953 for two reasons,” Timm says in the report. First, he says the coating was field-applied, when at the time it was known that shop-applied coatings for pipelines were of a higher quality.

Second, Timm says, while the order for the pipeline called for a coal tar enamel coating, other documentation is less clear about what the actual coating was made of, and Timm concludes it’s more likely it was “a solvent-based asphalt primer, two layers of asphalt-saturated glass fiber fabric and a white protective overlayer of white craft paper bonded with asphalt enamel.”

Coal tar is recognized as a superior coating versus asphalt, Timm notes, but even in 1953, health concerns about coal tar made it unlikely that it would have been applied in the field.

“Based on knowledge of the coating system used on Line 5 and the photographic evidence presented [in this report],” Timm concludes, “the asphalt enamel-based coating system on Enbridge Line 5 under the Straits is compromised or missing on many areas of the pipe.”

Enbridge replied to Timm’s report by referring concerned citizens to “a recent study commissioned by PHMSA, the federal agency that regulates pipelines,” which the company says addresses the issues brought up by Timm and shows that the company’s inspection practices are sufficient.

On March 13, Enbridge defended Line 5 at a Michigan Pipeline Advisory Board meeting attended by a number of protesters, including a man who doused himself and his grandson in what was reported to be syrup or cake batter to make a point about the danger of an improperly protected underwater oil pipeline.

The company said at that meeting that in fact there are 18 areas on Line 5 where there is coating delamination, but it is only the outer coating that is affected, and the company would not generally repair issues with that layer.

The company said that the report erroneously referred to those areas of delamination, where most of the coating system remains intact, as “holidays,” which would mean the bare metal is exposed. The protective coatings and cathodic protection on Line 5 are “working as designed,” the company said, according to MLive, and while the company would be inspecting the areas of delamination, officials are “confident [the coating system] is still intact.”

Enbridge has been subject to increased scrutiny in Michgan in recent years after its Line 6B pipeline suffered a rupture in 2010, releasing at least 843,444 gallons of oil, much of it into the Kalamazoo River as well as a nearby creek and shorelines, according to the EPA.

The pipeline failed despite a series of In-Line Inspections (ILl) that Enbridge performed on the 30-inch-diameter segment as part of its Integrity Management Program (IMP), according to a Notice of Probable Violation (NOPV) issued by the Pipeline and Hazardous Materials Safety Administration in July 2012.

The Line 6B rupture resulted in $3.7 million in fines from the PHMSA. In 2016, the company entered into a consent decree with the Department of Justice, stemming from that and another spill in Illinois in 2010.