Patti Seitz spent years as an architectural engineer working on buildings before she discovered that she finds designing containment and platforms for projects including bridges and water tanks to be challenging and rewarding.

As a senior structural engineer at Providence Engineering Corporation in Pennsylvania, Seitz turned toward containment design about five years ago, and has seen some interesting challenges in the field. 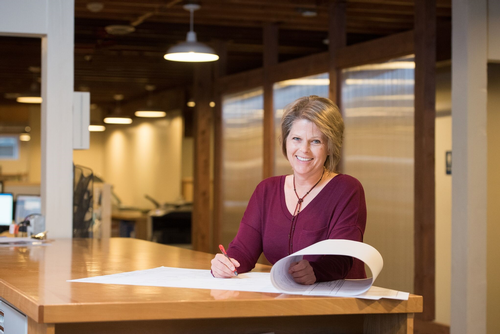 Courtesy of Patti Seitz
Patti Seitz spent years working on building designs as an architectural engineer before making the shift to specialty structural engineering, including containment and platform design for bridge and tank jobs.

Seitz (who is also an IFR-rated commercial pilot for single-engine-land aircraft in her spare time) spoke with PaintSquare News about what she enjoys about containment and platform design, and some of the more unique jobs she’s encountered along the way.

PaintSquare News: What is your background, and how did you come to containment design as a specialty?

Seitz: I got my degree at Penn State University, a degree called architectural engineering, specializing in structural engineering, to do mostly building design. That’s what we were trained for, and that’s what I did for many years in the industry: designed buildings. Recently, in the last five years, I was introduced to the containment industry and the bridge-painting industry, and started to dabble with one company, with their platform design and containment design.

I found that I enjoyed it much more than buildings, so over the course of the last five-and-a-half years, I’ve been getting out of the building industry and more into the bridge, tank, containment field, and miscellaneous structural engineering.

What drew you to containment and platform design and away from building design?

Growing up, when I was little, I didn’t play with Barbie dolls; I played with Erector sets. I was always taking things apart and putting them back together, so I have a very mechanically inclined mind. And just the different rigging—shackles and chains and wire clips, just rigging in general appealed to me much more than an architectural feature.

As someone who came to containment design fairly recently, what’s something you found that you might not have expected about the practice, or something that someone else who’s new to the business might not anticipate?

As far as containment goes, just all of the regulations. I actually went through SSPC’s C3 class to get more familiar with what the contractors have to deal with on a daily basis. And I was just dumbfounded by all of the regulations and requirements just to do that job. As far as platforms go, I guess the hardest thing to wrap your head around are the cable systems. They have huge measures of safety, and understandably so, because if installed incorrectly, they can be quite dangerous.

Tell me about one or two containment- or platform-planning projects you’ve been a part of that have posed unique challenges.

I worked with Titan Industrial Services on the Cumberland Viaduct (in Cumberland, Maryland), which was almost a mile long—I can’t remember exactly how many spans were involved, but it was a very large structure. This was probably in my first or second year in this industry. They had different rigging systems for different spans, based on what worked best, and what was available to attach to. And in addition to that, they asked me to check the capacity of all the spans. No two spans were alike; no two sets of beams from span to span were alike.

I spent probably three weeks solid working on an Excel spreadsheet that would help me check all of the beams and all of these spans. I did so because I’m not a civil engineer; I wasn’t trained in how to design bridges, so I don’t have that software. It’s expensive software, and we don’t have it. So I had to kind of create my own program to expedite things; I couldn’t be checking 2,000 beams by hand. So I spent a good three weeks solid designing this spreadsheet that would check all of these numbers for me.

Then I spent another six weeks inputting the data for span to span. So it was just very labor-intensive, and I have very fond memories of finishing that job with a great sense of accomplishment.

Another challenging condition would be drawbridges. Sometimes the owner wants the bridge to be able to go up and down with the platform in place. Sometimes the contractor needs the platform to be installed while the bridge is in the horizontal position, but then it needs to be in the upright position when they work on it so that boats can get through while the bridge is shut down. So you have counterbalance issues that you have to worry about, you have issues with, these platforms are swinging, how are they rigging it so that the thing can go up and down—that’s always a challenge.

Is that more frustrating or more exciting for you?

I enjoy doing it! That kind of work, the problem-solving, is something that is just natural to me. I love puzzles, and the more complicated the situation, the more I get into it. What frustrates me is when I have too many people calling me on any one day, when I’m trying to zone in on one thing, and I keep getting interrupted. I put my blinders on and put my phone on DND and try not to be interrupted, as much as possible.

There are obvious differences between bridges and tanks; to you, what are the major differences going into a containment project on one versus the other?

Are there particular changes or trends in containment or platform design that you’ve seen in your time in the industry, or that you anticipate coming soon?

I can’t say that I’ve really noticed trends, as it’s only been five years. I keep working with more contractors and different structures, and each contractor seems to have their own way that they like to do things. After five years, I still find that I’m learning, bridge to bridge.

I do see generic rigging that contractors do, versus a purchased product. There’s one system that’s designed for tanks, and you can buy the system and it comes with instructions: “This is how it works.” But another contractor may look at [that system] and say, “Well, that’s too expensive for me, but I like the look of that system, so I’m going to come up with a way to do my own outriggers,” and then they ask me to analyze to make sure that they work like that other system.

What’s your advice for someone who wants to get into containment design?

You’d have to have a personality that likes to get dirty. When you go on job sites, it’s not pretty. [You should] like to climb, [not fear] heights, [not be] afraid to explore a job site, which can be very different from site to site. And again, a puzzle-solving personality, because nothing’s the same. You can come up with a standardized way of doing things, but job to job, there’s always going to be something different that you have to consider.