During the annual roof coatings conference, held at the end of February, the Roof Coatings Manufacturers Association elected two new members to its board of directors and recognized three members for exceptional contributions to the industry.

Will Lorenz and Josh Poole were elected by the RCMA membership to sit on the board of directors for the 2017-20 term. Lorenz comes to the board as the national sales manager at General Coatings Manufacturing Corp. (Fresno, California), and Poole serves as market manager for Tremco Inc. (Beachwood, Ohio).

A new honor (it was first awarded in 2016), the Emerging Leader Award aims to recognize an individual who is either less than 35 years old or who has been in the industry less than three years who is on track to become a leader in the roof coatings industry and serves as a role model for peers. This year, the award went to Ryan Blad, 838 Coatings. 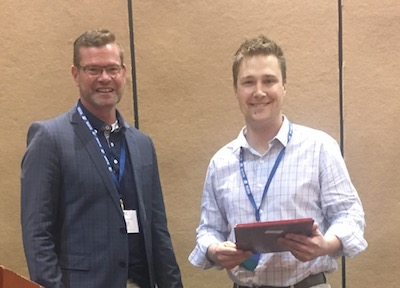 Blad serves on the RCMA board of directors and is co-chair of the RCMA technical affairs committee. He has been consistently active in the development of RCMA’s technical and research programs, the association said in a press release.

A discretionary honor that is only given when deemed appropriate, the industry award is for outstanding interest and activism in promoting the roof coatings industry and exemplary efforts to achieve significant advancements. The 10th recipient is Matt Lendzinksi, Dow Chemical Company.

Lendzinski is the co-chair of the RCMA communications, membership and education committee.

“Matt is a well- deserved honoree, and has been instrumental in the growth of RCMA’s membership and the development of its communications, educational, and outreach programs,” commented Jim Kirby, RCMA Executive Director.

First presented in 1985, RCMA’s highest honor is given to an individual who has exemplified outstanding service and made significant contributions to the roof coatings industry. This year, the honoree was Greg Hlavaty, Western Colloid.

While serving on the board of directors, Hlavaty has contributed his expertise to RCMA’s committees and task forces. According to the press release, the award recognized Hlavaty’s efforts in facilitating RCMA’s merger with the Reflective Roof Coatings Institute.

“Throughout Greg’s time with the RCMA, he has been a passionate advocate for the Association’s growth and development, and his efforts on behalf of the RCMA / RRCI merger have strengthened the outlook for our industry,” said RCMA board member Helene Hardy Pierce.

RCMA presented a special recognition award to recently retired Brock Landry, Venable LLP, in acknowledgement of his exceptional service to the industry. The association also recognized outgoing board member Brian Anthony, Brewer Company, for his participation over the past 12 years.

The next RCMA meeting will be June 19-21 in Washington, D.C.