A team of engineers at the University of Colorado Boulder have invented a scalable metamaterial, which can cool objects that are under direct sunlight with zero energy and water consumption.

“The key advantage of this technology is that it works 24/7 with no electricity or water usage,” said Ronggui Yang, a professor of mechanical engineering and a Fellow of the American Society of Mechanical Engineers. 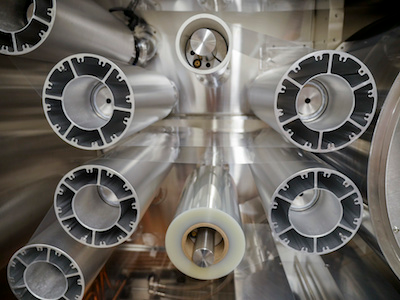 Photos: University of Colorado Boulder
The new material could provide a supplementary cooling means for buildings. It would also be cost-effective, since it has the ability to be manufactured in large-scale rolls.

In August 2015, the university received a $3 million federal grant with the goal to develop cooling technology that would enable efficient, low-cost cooling for buildings—mainly thermoelectric power plants. While a method of cooling a plant or building's roof by using long-wavelength infrared light at night has long been practiced, such technology had not been adapted for daylight use, nor was it cost-effective.

The engineers at Colorado had to develop a material that could combine that infrared radiation known for nighttime cooling with the ability to reflect solar rays back into the atmosphere.

The researchers came up with a patent-pending glass-polymer hybrid material paired with a layer of silver. This material measures about 50 micrometers thick and can perform efficient passive radiation cooling by reflecting the solar energy back into space while simultaneously allowing the surface to release heat.

The new material could provide the supplementary cooling means for buildings and power plants. It would also be cost-effective, since it has the ability to be manufactured in large-scale rolls.

“We feel that this low-cost manufacturing process will be transformative for real-world applications of this radiative cooling technology,” said Xiaobo Yin, co-director of the research and an assistant professor who holds dual appointments in CU Boulder’s Department of Mechanical Engineering and the Materials Science and Engineering Program.

Breaking Into the Market

The team said it would like to see the technology made available to the general public, citing that “10-20 square meters of this material on the rooftop could nicely cool down a single-family house in the summer.”

The glass-polymer and silver blend, however, is different than what's already on the market. Most of the reflective coatings for roofing are either white coatings (typically comprised of acrylics, urethanes, silicones, etc.) or aluminum coatings paired with asphalt. Recently, the market has seen an increase in infrared reflective enamels, though their reflectivity increase is lower.

The growth with this new product, however, was predicted in 2015's roof coating market report, citing that growth will be driven by new cool technology and demand for eco-friendly techniques amid growing concerns about global warming.

In addition, the team also found the material useful for increasing the life of solar panels, which tend to overheat in direct sunlight. The cooling technology would prevent overheating from occurring, allowing for the solar panel to operate at full performance regardless of weather condition, which is the main cause of an estimated 1 percent degredation each year for a 20-25-year lifespan.

The university’s Technology Transfer Office is working with the engineers to explore all of these potential applications by creating a 200-square-meter cooling farm prototype later this year.