President Donald J. Trump visited Newport News Shipbuilding Thursday (March 2), speaking on the deck of the aircraft carrier Gerald R. Ford to a group of more than a thousand shipbuilders and sailors.

In his remarks, he foretold increases in the size of the Naval fleet and praised the newly built carrier he was aboard, calling the Gerald R. Ford "American craftsmanship at its biggest, and its best, and its finest."

Trump: "We will give the men and women of America's armed forces the resources you need to keep us safe. We will have the finest equipment" pic.twitter.com/XKpihbvgye

Trump echoed sentiments he expressed in his address to a joint session of Congress Tuesday (Feb. 28), noting, "I asked Congress to eliminate the defense sequester" and "I am calling for one of the largest defense spending increases in history."

"Our Navy is the smallest it's been since World War I," Trump said. "Don't worry: It'll soon be the largest."

He also promised a 12-carrier fleet; the Navy currently has 10 carriers. Two (the Gerald R. Ford and the John F. Kennedy) are due to be commissioned in the coming years, but two older vessels (the Nimitz and the Dwight D. Eisenhower) are likely to be decommissioned in the next decade.

Trump announced earlier this week that he would seek a $54 billion increase in funding for the military in his proposed budget.

Trump promised during the 2016 presidential campaign that under his presidency, the Navy’s fleet would expand to 350 ships, it’s largest force in 20 years. Secretary of the Navy Ray Mabus released the Navy’s Force Structure Assessment report in December, calling for a 355-ship fleet, building on an earlier goal of reaching 308 ships by 2020.

Some members of Congress expressed concern in January when the federal hiring freeze Trump ordered was observed by Naval shipyards, and some new shipyard hires were put on hold. On Feb. 2, the Department of Defense clarified that shipyards were exempt from the freeze, as they support military operations.

The "defense sequester" is a legacy of the Budget Control Act of 2011, which is currently set to decrease discretionary defense spending annually through 2021. Shipyard industry groups have lobbied to end sequestration and open the door to increased Naval shipbuilding; with the budget controls in place, Trump's plans to increase defense expenditures and expand the Navy's fleet are in doubt.

Newport News Shipbuilding, a division of Huntington Ingalls Industries, is the largest shipbuilding company in the United States, and the largest industrial employer in the state of Virginia. The shipyard is a major supplier for the U.S. Navy, as the sole designer and builder of aircraft carriers for the Navy, and one of its two suppliers of submarines. 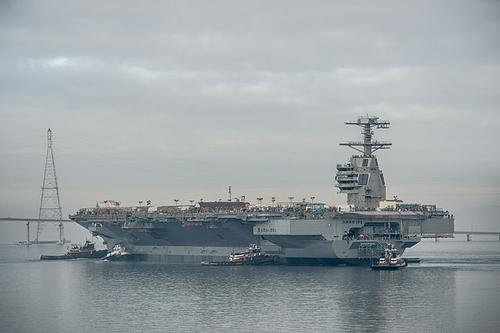 U.S. Navy/Huntington Ingalls Industries/Chris Oxley, public domain, via Wikimedia Commons
The Gerald R. Ford is the lead ship of the class of the same name; it was christened in 2013 and is current in “pre-commission” status, with the expectation it will be put into service later this year.

The company laid off more than 700 workers in February 2016 and warned of more potential job cuts to come, but reportedly rehired more than 200 of those workers in May.

The shipyard is currently working on projects including the construction of the Enterprise, which will be the Navy's third Gerald R. Ford-class aircraft carrier, and maintenance work on the Dwight D. Eisenhower, a 42-year-old Nimitz-class carrier.

The Gerald R. Ford is the lead ship of the class of the same name; it was christened in 2013 and is current in “pre-commission” status, with the expectation it will be put into service later this year.

It was intended for commissioning in 2016 but issues during testing set the project back. It cost an estimated $12.8 billion to build, and another $4 billion in research and development costs.