Architect Ricardo Bofill’s first encounter with the cement factory was in 1973, when he set out to make the abandoned structure his home. Now, at age 77, he not only lives there, but works there with his Ricardo Bofill Taller de Arquitectura team and, despite years of work, Bofill maintains that the property will always remain unfinished.

La Fabrica (as it is now called) sits just outside of Barcelona, and was shut down after World War I because of pollution, and when Bofill and company found it the silos were full of cement. 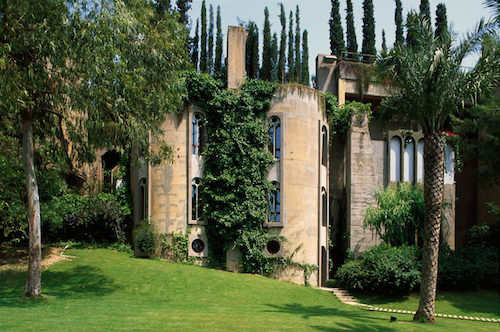 Photos: Ricardo Bofill
The factory, just outside of Barcelona, was shut down after World War I because of pollution, and when Bofill and company found it the silos were full of cement.

“The construction work, which began with partial destruction with dynamite and jack hammers, lasted for more than a year and a half. It was a precision job, which consisted in revealing the hidden forms and recovering certain spaces, comparable to the work of the sculptor whose first task is to confront the material,” Bofill says in a narrative on his website.

Then, greenery was added, followed by the necessary functional improvements.

After the initial deconstruction came reconstruction, where imagined windows and doors eventually became reality, paving the way for a cathedral, gardens, working space and residency.

The team works in the silos, four floors connected by a staircase. Bofill’s office is on the first floor, a space with a 13-foot-high ceiling.

Bofill notes that he found every different visual aesthetic trend that had been developed up until that point at the factory—surrealism, abstraction and brutalism—and has decided to retain as much of it as possible.

The conference room or gallery, for instance, holds 32-foot-high ceilings with oxidized surfaces and raw concrete walls. In the upper part of the factory, Bofill “transformed a huge volume of brute cement into the main living room. It is a perfect cube with a sequence of arc windows whose regular rhythm evokes the metaphysical perspectives of De Chirico.”

The décor is minimalist, which only accentuates the largeness of the now-home’s frame.

“I have the impression of living in a precinct, in a closed universe which protects me from the outside and everyday life,” Bofill says. “The cement factory is a place of work par excellence. Life goes on here in a continuous sequence, with very little difference between work and leisure.”