Although the crack that plagued progress in Australia’s Sydney Metro Project last September is gone, a recently released failure assessment has shed light on what went wrong with a section of the “Skytrain.”

The $260-million contract of phase one—awarded to Italy’s Salini Imregilo—contains a 2.9-mile viaduct and a 885-foot-long cable-stayed railway bridge over a major highway. This Skytrain section is one of 115 spans that are being constructed using the precast, segmental span-by-span method, in which a series of box-girder segments are erected, supported by an overhead gantry, and then stressed longitudinally. 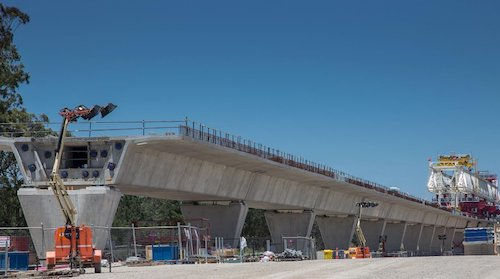 Photos: Sydney Metro
This Skytrain section is one of 115 spans that are being constructed using the precast, segmental span-by-span method, in which a series of box-girder segments are erected, supported by an overhead gantry, and then stressed longitudinally.

The report, released by engineering consultant Aurecon Australia, shows the multiple errors that led to the failure of Span 60 last fall.

In standard practice for march-cast segmental construction, each segment is cast against its neighbor so the two exactly match and fit together. In the case of Span 60, the report said, this procedure was compromised for the joint in between segments Nos. 5 and 6 because the original No. 5 segment had to be recast.

Because of the recast, a closure pour was used, which is a departure from standard cast procedure.

The report went on to say that, in addition to this compromise, a compression failure of the bottom flange of the box girder occurred in the closure pour, about 33 hours after the final stressing of the tendons. This failure caused a hinge point to form, lifting the girder over 2 feet.

That failure was caused by insufficient temporary clamping pressure during the stitch-joint construction process. As the structure cooled overnight, the segments pulled apart, creating the crack. According to the report, the use of insufficient concrete paired with the use of an epoxy resin exacerbated the problem.

The report concludes with suggestions on moving forward with the project. The authors recommend specifically for the Span 60 area that “a timber ply bulkhead be provided close against the northern end face of the Span 60 girder, covering all the anchorages, and restrained in place. The proximity and strength of the end diaphragm of Span 59 is considered sufficient to protect persons from injury due to sudden strand release at the southern end of the Span 60 girder. However, consideration should be given to providing a timber ply bulkhead in this location, to protect the anchorages on the northern end of the Span 59 girder.”

Recommendations also included eliminating the use of epoxy injection, and real-time monitoring of strain gauges.

Span 60 has since been removed, reports the Engineering News-Record, and the timeline for the completion of phase one and when operations can begin remains in 2019.

Phase two is also well on its way, with the planned twin tunnels that will go under Sydney Harbour receiving approval in January. The tunneling contract is expected to be awarded in the middle of 2017.

For more information on the project, visit www.sydneymetro.info.