New York City could see construction last for seven years for the installation of the Hudson Tunnel, officials said Tuesday (Feb. 21) at a community presentation.

The multibillion-dollar project is part of Amtrak’s massive Gateway Program, which aims to overhaul parts of New York’s and New Jersey’s transportation infrastructure in an effort to expand the U.S. train service's northeast corridor.

In addition to the timeline, another new detail mentioned in the presentation was the aesthetic of the necessary ventilation shaft for the tunnel, which could potentially be so tall that it would block views from the High Line, a major tourist attraction. 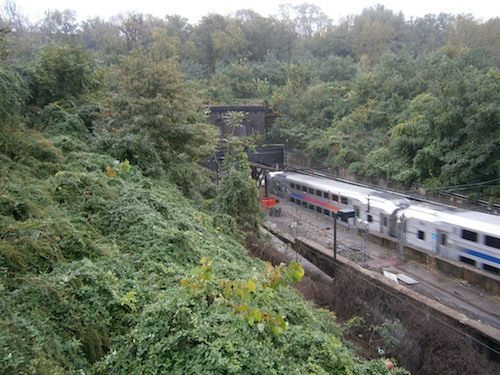 Hudconja, CC-BY-SA 3.0, via Wikimedia Commons
Completed in 1910, the North River Tunnel was already well into its prime when Super Storm Sandy inundated it with millions of gallons of salt water, which left behind corrosive chlorides.


"We obviously want to make sure that whatever we do has the lightest touch possible on the natural and the built environment," New Jersey Transit Chief Planner Jeremy Colangelo-Bryan said.

The construction disruption in Manhattan is slated for 2019 to 2026.

The new tunnel is considered to be one of the most important transportation projects in the nation, in part because it will allow for the reconstruction of the North River Tunnel. Completed in 1910, the North River Tunnel was already well into its prime when Super Storm Sandy inundated it with millions of gallons of salt water, which left behind corrosive chlorides. The salt water aftermath continues to damage the concrete tunnel liner and bench walls, which house the electrical and signaling systems that support the train’s operations.

The tunnel reportedly only had a decade or two left before a mandatory shut down would have to take place—one tube at a time—in order to make repairs possible. Such a shutdown would be catastrophic for the 200,000 daily passenger trips that take place on the tunnel.

The construction will add to the traffic jam already taking place in Manhattan, and will use the “cut-and-cover” method, in which part of 30th Street will be dug up and covered over so construction would continue underneath.

The Port Authority of New York and New Jersey ­­­­­signed off on the $32.2 billion, 10-year capital plan for the Gateway Program on Feb. 16. About $2.7 billion of that capital is estimated to be allocated the tunnels.

New York and New Jersey are said to be splitting the costs with the federal government, though it’s unclear if President Donald J. Trump’s policy to block federal funds to sanctuary cities will have an impact on the federal contribution.

The Port Authority estimates the plan will create $20 billion in wages and $56 billion in overall economic activity.

A timeline for when the Hudson Tunnel Project will go out to bid is still unknown as the Federal Railroad Administration and New Jersey Transit are currently preparing the Environmental Impact Statement to evaluate the project. The EIS is slated to be released in the summer of 2017.