The city of Boston is considering a permanent solution to combat climate change and its accompanying rise in tide and rainfall levels. The estimated billion-dollar fix might come in the form of a sea barrier that would stretch across the 4 miles between Hull and Deer islands.

This idea was raised after a recent city report released by Climate Ready Boston, an initiative to develop solutions to prepare the city for climate change. The report detailed scientific findings of what weather and climate changes the city could expect to endure within the next century as well as action plan suggestions, such as a surge barrier in the harbor. 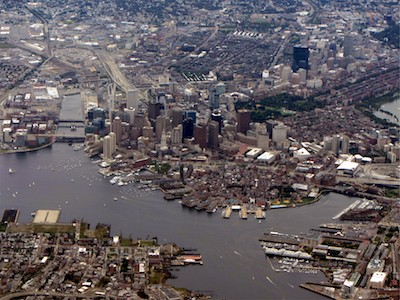 David Wilson, CC-BY-SA 2.0, via Wikimedia Commons
Boston already deals with stormwater flooding today, due to the city’s drainage system’s struggles to manage intense rain events, which will only increase with heightened sea levels and increased precipitation.

“For the surge barrier option, there would be some narrowing of the harbor mouth by virtue of the in-water infrastructure necessary to support the barrier,” the study explains. “A feasibility study would need to explore the size, number, and locations of gates necessary to provide flood risk reduction while minimizing the impacts on the environment and navigation.”

Last week, the Barr Foundation (an organization that seeks to advance solutions for climate change) announced that it had awarded a $360,000 research grant to the Sustainable Solutions Lab at the University of Massachusetts Boston to study the possibility of building a barrier.

The Boston Globe recently reported on the study and likened the project of a harbor barrier to the size, complexity and cost of the city's famous Big Dig project, but it noted that many city officials are pointing to the estimates in the study and claim that the task is necessary.

The Climate Ready Boston report notes that Boston already deals with stormwater flooding today, due to the city’s drainage system’s struggles to manage intense rain events, which will only increase with heightened sea levels and increased precipitation.

Over the coming decades, the report shows that Boston could experience flooding that threatens 90,000 residents. If the city sees a sea level rise by 3 feet over levels recorded in 2000, Boston would sustain an average of $1.4 billion a year in flood damage, making the price tag on the barrier seem not so daunting.

“There’s a sense of urgency about these issues,” Austin Blackmon, the city’s environmental chief, told The Globe. “We need to evaluate the feasibility of options like this. If it’s the best solution to protect Boston, we shouldn’t hesitate.”

In addition to the hypothetical barrier’s 4-mile length, it would rise at least 20 feet above low tide, which makes it a barrier akin to structures in New Orleans, Venice and Rotterdam.

The cheapest of the three similar barriers is the $500 million Maeslant surge barrier outside of Rotterdam, which has the largest moveable parts of any flood barrier in the world.

It took six years to build in the 1990s and was closed for the first time in 2007. The structure has two doors, each 689 feet wide, 72 feet high and 49 feet deep, which operate with ball-and-socket joints, each 33 feet in diameter and weighing about 750 tons.

The Lake Borgne surge barrier, near the Gulf of Mexico in Louisiana, cost about $1.1 billion. It took five years to build the 1.8-mile, 26-foot high structure.

Officially known as the Inner Harbor Navigation Canal Surge Barrier, the project won the 2014 Outstanding Civil Engineering Achievement award. The structure contains 1,271 vertical piles, 647 steel batter piles, 2,514 closure piles, a 150-foot-wide sector gate, an adjacent 150-foot-wide barge bypass gate, a 56-foot-wide lift gate and two T-walls that tie the barrier into onshore levees. The design allows for surge water to go over the top of the wall and become stored in the two canals, which are also protected by the levees and floodwalls.

­The Venetian barrier is still under construction that began in 2003. It is slated to begin operation in 2018 and the project has already cost $5 billion. The structure contains a 1,200-foot barrier of 57 flood gates that can be raised at high tide, allowing every inlet to be plugged.

While these examples show what a giant barrier in the harbor might resemble, Bob Daylor, a private engineer in Boston, has also put a plan on the table that consists of a series of dikes built in such a way that they could adjust with the sea levels and changing conditions.

The route taken will rely heavily on what the minds at UMass find.

“This is likely to be incredibly expensive and ecologically disruptive,” said David Cash, dean of the university’s McCormack Graduate School of Policy and Global Studies. “But if you look at the flood maps in 80 years, the danger is potentially catastrophic.”