Two new coatings and pretreatment technologies developed by NEI Corp. are in the process of receiving full patents from the U.S. Patent and Trademark Office.

In a Feb. 8 press release, the Somerset, New Jersey-based nanotechnology company said it received a notice of allowance from the federal office, an important step in the process to full patent protection.

The technologies—one for a durable, highly hydrophobic coating and the other for an adhesion-promoting surface treatment—complement NEI’s portfolio of patents pertaining to superhydrophobic, self-healing and abrasion-resistant coatings, according to the company. 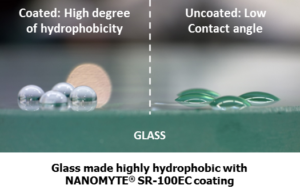 NEI
One of the patents is the basis for NEI's Nanomyte SR-100EC hydrophobic coating product.

The hydrophobic functional coating application describes compositions that are desirable for numerous applications, as they impart easy-to-clean and stain-resisting properties to surfaces, the company says. Applications for this technology would include plastics, metals, glass, painted surfaces, fabrics and 3D-printed parts.

The adhesion promoter patent application describes a chromate-free, surface pretreatment composition. The composition results in a thin-film coating having a graded structure, i.e., an inorganic oxide layer that bonds strongly with steel and a loosely crosslinked top layer containing functional groups that can further crosslink with paint overlay, the company adds.

The new technology is reportedly valuable to applicators who paint metal structures, such as bridges, ships, and other steel structures. It is also applicable to industrial painting operations, such as coil and spray coatings, the company says.