China Next Up in Vertical Forest Trend

Italian architect Stefano Boeri has been giving new meaning to the phrase “concrete jungle” for years, and he just added a new destination to his list of cities destined for vertical forestry.

This week, Stefano Boeri Architetti, announced plans to build two green towers in Nanjing, China, coming a few years after the firm completed its prototype Bosco Verticale, in Milan. Construction on a third set of towers is slated to begin later this year in Lausanne, Switzerland.

The idea was to clean up the air in Milan with the building envelope’s microclimate, which produces humidity and oxygen while absorbing CO2 and dust. Boeri spent years with botanists and ethologists researching the types of plants that were appropriate for the building, ending in specific floor-by-floor planting. 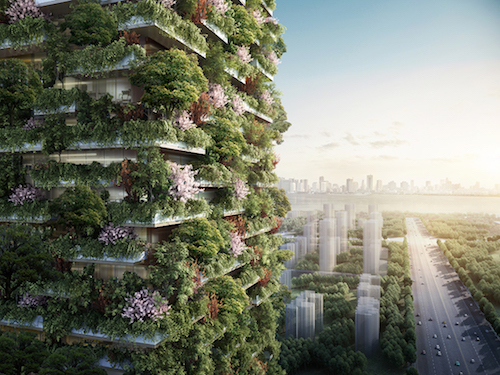 Photos: Stefano Boeri Architetti
The Nanjing Green Towers will not be residential like the ones in Milan, but rather an office building and a hotel. The architecture firm said in a news release that the towers will be characterized by green tanks and balconies, similar to the terraces in Milan.

“Bringing trees into the sky of a city means fighting the battle against the production of CO2 in the place where it is generated most," Boeri told The Telegraph in an interview. “It’s like fighting the enemy in its own territory. With our projects we have proved that a tree could grow in the sky of a city in the same way it does on the ground.”

The residential towers in Milan are 19 stories and 27 stories high, respectively, and support 60 varieties of nearly 800 trees and more than 90 different plants, including 11,000 perennial and covering plants and 5,000 shrubs, according to The Architect’s Journal.

The towers have essentially created their own ecosystem and are now home to an estimated 1,600 birds and butterflies.

The Bosco Verticale was part of a $2.5 billion public-private investment of a larger 34-hectare (about an 84-acre) area where development began in 2004. Beneath the green facade, the building is mostly made of concrete with walls faced with black ceramic panels that contrast with the white balconies.

The columns are made of reinforced concrete and the floors are post-tensioned reinforced concrete and the balconies are 28 centimeters. thick, according to a designbuild-network.com article that continues with more specifics on the towers’ construction: “PERI Basiano provided a customised formwork and scaffolding concept for building the towers. The concept included a rail climbing system (RCS), PERI UP scaffold system and SKYDECK panel slab formwork.”

The substrate in the plant containers themselves also had to be durable, and the main material there is volcanic lapilli, an inorganic material that has properties prime for water retention and dimensional stability, according to the Council on Tall Buildings and Urban Habit.

The Nanjing Green Towers will not be residential like the ones in Milan, but rather an office building and a hotel. The architecture firm said in a news release that the towers will be characterized by green tanks and balconies, similar to the terraces in Milan.

Along the facades in Nanjing, 600 tall trees, 500 smaller trees and 2,500 cascading plants and shrubs will cover the 6,000 square-mile area with the hopes of absorbing 25 tons of CO2 per year and producing 60 kilograms of oxygen each day.

Boeri told Mashable’s Maria Gallucci that in addition to the goal of cleaning up the air in cities, he also wanted to bring forestation to the ever-expanding population in China.

“Millions of people are abandoning the countryside and moving into cities. It's very important to completely change how these new cities are developing,” he said. “Urban forestation is one of the biggest issues for me in that context. That means parks, it means gardens, but it also means having buildings with trees.”