A Polish rail vehicle manufacturer is reportedly working with a coating manufacturer from Berlin to test the world’s first biobased railcar coating. 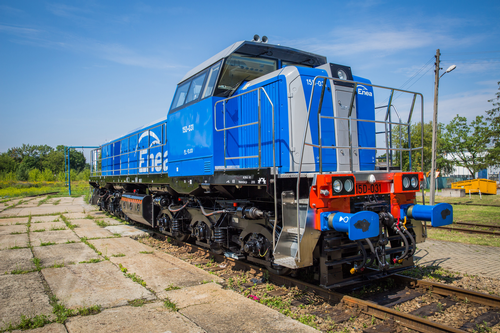 Newag SA has coated two diesel locomotives with a paint made by Lankwitzer Lackfabrik, formulated in part with Desmodur eco N 7300, a plant-based hardener developed by raw materials supplier Covestro. Lankwitzer’s EVOClear 294 / PH 94-0000 was applied like a standard clearcoat, and according to the manufacturer, performed as well as a more traditional polyurethane under testing.

Covestro’s Desmodur eco N 7300 was first released in 2015; the pentamethylene diisocynate-based material is made from field corn that’s not suitable for human consumption. It was described as being on par with conventional, petrochemical-based hardeners in terms of properties like hardness and resistance to weathering, scratching and chemicals.

Other details of the coating formulation were not immediately available from Lankwitzer.

Covestro, which participated in the development of the coating, says the new clearcoat from Lankwitzer stands up to chemicals used in graffiti removal, an important attribute for railcar coatings.

“With a new product, a coating manufacturer’s first priority is, of course, to fulfill the customer’s specifications,” said Mateusz Fedko, project manager at Newag. “If the coating offers added value on top of that, as is the case here with the renewable raw materials, it gives us a very good opportunity to set ourselves apart from the competition.”

Lankwitzer is reportedly looking to expand the use of the new product into other applications.

“I am certain this biobased clearcoat will also create value for our customers in other industries,” said Lankwitzer’s Michael Voxbrunner.