Some members of Congress are working on a strategy to roll back a pending rule that would subject federal contractors to increased scrutiny regarding past labor and safety violations. 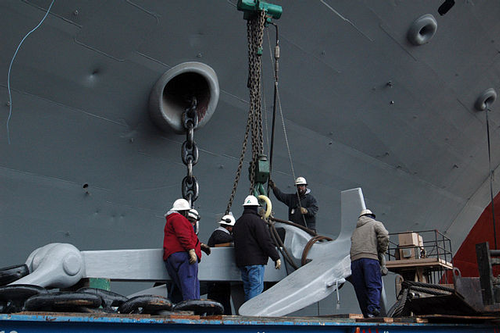 U.S. Navy photo by Mass Communication Specialist 3rd Class Refugio Carrillo, Public domain, via Wikimedia Commons
The so-called "Blacklist Rule" requires businesses seeking federal contracts of over $500,000 to disclose not only civil and administrative proceedings against them, but also violations of any of 14 listed workplace protections in the past three years.

The month the rule was set to go into effect, a federal court in Texas issued a preliminary injunction against the provisions.

The rule requires businesses seeking federal contracts of over $500,000 to disclose not only civil and administrative proceedings against them, but also violations of any of 14 listed workplace protections in the past three years.

A copy of the final rule is available here.

While a legal challenge against the rule is still pending, members of Congress are employing a legislative strategy to try to make the controversial measure disappear.

The bill provides for congressional disapproval under the Congressional Review Act to invalidate the Federal Acquisition Regulatory Council and U.S. Department of Labor's "blacklisting" rule.

The joint resolution of disapproval now goes to the Senate for vote. Some experts say the rarely used legislative tool may be successful in this case, with President Donald J. Trump in the White House and Republicans currently in control of both houses of Congress.

The Department of Labor holds that the new rule, which is supported by some labor organizations, ensures contractors who don’t follow the rules aren’t rewarded with federal contracts, and those who do are given a fair chance.

Opponents, however, fear that the rule “imposes a sweeping new regulatory scheme on federal contractors that will disrupt the federal procurement process, significantly increase red tape and costs for both government and industry, and serve as a barrier to entry to federal contracting for many businesses,” according to the Associated Builders and Contractors.