"Necessity is the mother of invention" drives technology development in many markets, and is especially true in architectural coatings. Increasingly strict regulations regarding the environment, people’s health and sustainability have accelerated and driven innovation.

In addition, performance expectations by building and home owners have added to the motivation, as well as continued consolidation of raw material suppliers and paint companies.

Volatile organic compounds (VOCs) remain a top focus of the industry, as regulations continue to tighten up to reduce emissions with a concurrent expectation by the consumer that the new products will maintain or exceed previous performance at similar price points. This has led to the sustained advance of resin development. For example, in the past year, we saw the commercialization of a Dow Coatings Material new alkyd chemistry, described as both environmentally friendly (ultra-low VOC) as well as capable of delivering the resistance to corrosion, gloss retention and adhesion as compared to traditional solventborne alkyds.

Bio-based materials are being utilized more widely, as the stigma from early inadequacies has been replaced by the industry embracing materials that are both sustainable and, in some cases, outperform their petrochemical counterparts. These include soy-oil based polyols for polyurethanes, bio-solvents substituted for N-Methyl-2-pyrrolidone (NMP) and epoxidized soybean oil (ESBO) which is used as a plasticizer, a pigment dispersing agent as well as an epoxy reactive diluent. 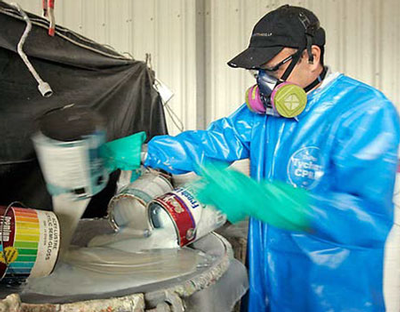 The recycling of post-consumer (leftover) paint is a growing market. One wouldn’t normally think of recycling paint as emergent innovation, but it does present some challenges in how it is addressed. As an alternative to disposal of liquid paint as hazardous waste on specific dates in communities, PaintCare Inc. was created by the American Coatings Association and established to represent paint manufacturers. PaintCare plans and operates paint stewardship programs in the United States in those states that pass paint stewardship laws. Oregon, California, Colorado, Connecticut, the District of Columbia, Maine, Minnesota, Rhode Island, and Vermont are current states with programs.

The innovation is managing incoming waste product to create quality paints in various colors and finishes that comply with local air quality standards. Several other states are expected to also establish stewardship programs.

In the past year, there have been several products introduced to the market that address health. For example, The Sherwin-Williams Company launched Paint Shield, which is billed as the first EPA-registered microbicidal paint that kills greater than 99.9 percent of five specific bacteria which are typically difficult to kill. The market should further expect to see the advancement of new products to combat bacteria that are resistant to antimicrobials, by companies such as Lonza and Troy Corporation. In addition, there will be the continued growth of antimicrobial coatings utilizing nanotechnology.

There is greater focus on the maintenance of surfaces to enable them to be sterilized with strong cleaners, which has led to other new resins and a greater use of fluoropolymers; not just for industrial applications. AGC has made significant inroads with various grades of Lumiflon, for instance.

To reduce exposure to solvents in even low-VOC coatings, paints have been developed that act as both primer and topcoat, thus enabling faster completion of a project, as well as a reduction of volatiles during the coating’s cure. Rather than prime and then topcoat once or twice, the painting contractor or homeowner is able to apply one coat of paint and be finished.

The use of polyisocyanates remains under scrutiny as used in 2K polyurethane systems. Several companies have developed 1K waterborne resin systems, with resultant paints providing performance similar to traditional 2K solventborne that were used almost exclusively in industrial field-applied and OEM coatings. There are alternate chemistries to polyol/PI polyurethanes, and new patent applications seem to be filed almost monthly. Some of these are making inroads in architectural coatings. Similarly, waterborne epoxies are also evolving, with applications for garage floors and medical and veterinary offices.

The trend in the coatings market for paints that provide multiple functionalities besides those typically associated with their end applications continues. In addition to the aforementioned antimicrobial, a growing area is responsive, or biomimetic coatings. These are coatings that respond to external stimuli, and although they have been mostly evident in the industrial market, they also are finding their way in to the architectural market as the materials and technologies the paints are based upon become more cost-effective due to economies-of-scale or/and competition.

Although these are some of the developments, it is best for the reader to be diligent in watching for technologies and innovations appearing in other countries, which can be followed by setting up one or several alerts online using keywords and search terms.

Marc Hirsch is a senior development scientist and principal consultant with M&M Hirsch & Associates. He has 37 years of experience in formulation, application development, marketing and technical sales in the delivery of innovative products in material science, fabricated products and market facing businesses focused on the coatings, automotive, construction and wood products industries.