Naval shipyards are among the federal entities that are exempt from the 90-day hiring freeze put into place by President Donald J. Trump, according to the Department of Defense.

On Jan. 23, Trump signed an executive memorandum stopping any new hiring across the federal government. The order included a caveat, that exceptions would be made in order to meet “national or public security responsibilities,” such as in the case of military hiring. 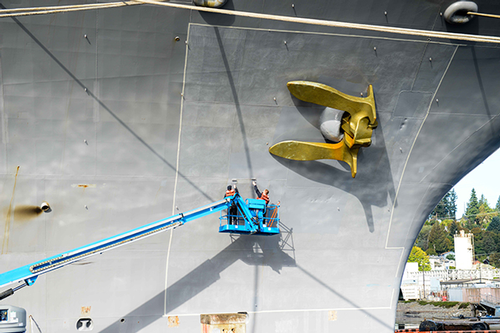 Shipyards were not specifically exempted, though, initially, and in New Hampshire, new civilian hires at Portsmouth Naval Shipyard received notices that their start dates were postponed, according to the New Hampshire Union Leader. The same thing happened at Puget Sound Shipyard, in Washington state, according to the Kitsap Sun.

On Jan. 31, a group of legislators wrote to the president and to Secretary of Defense James Mattis, asking for clarification on the matter, and for civilian shipyard workers to officially be exempted.

By Thursday (Feb. 2), lawmakers got the word they were hoping for: The DOD confirmed that shipyard workers would be among the exemptions to the freeze, due to their importance to national security. The exemption applies not only to Portsmouth Shipyard, but nationwide.

“I’m very pleased that the Department of Defense heeded our call to exempt shipyard employees from President Trump’s hiring freeze so that the Portsmouth Naval Shipyard, and all of our nation’s public shipyards, can continue to fulfill their missions,” said Sen. Jeanne Shaheen (D-NH), who had been among the lawmakers calling for the exemption.

Prior to his inauguration, Trump expressed his wish to expand the Navy’s fleet to 350 ships; in December, the Navy released its plan, to scale up slightly more, to 355 units. The Navy already had a short-term goal of having 308 ships by 2020; recent numbers put the fleet of active ships at 274.

According to a 2015 National Defense University report, the military accounts for 69 percent of shipbuilding and repair work done in the United States annually.

Public shipyards employ more than 33,000 full-time-equivalent workers, according to the Navy, and that number is supplemented by private contractors performing work on ships.