Contractors, designers and coatings suppliers were honored Monday (Jan. 30) at SSPC 2017 for their work on commercial and industrial painting projects.

A classic roller coaster, spillway gates, and a space agency building were among eight projects recognized during the SSPC Structure Awards ceremony. Each year, SSPC recognizes the project teams for excellence on particular coatings projects with its Structure Awards.

The Structure Award winners, listed below, will also be featured in a photo essay in an upcoming issue of JPCL, Durability + Design's sister publication. The SSPC 2017 conference ends Thursday (Feb. 2). 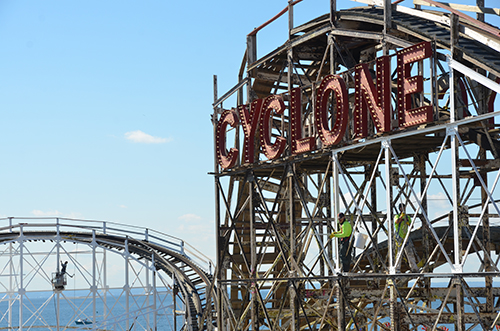 The George Campbell Award (Commercial) went to the:

Built in 1927 and still in operation, the Cyclone roller coaster is an official New York City historical landmark. However, because the coaster sits near the ocean, and suffered years of neglect and damage from the elements, the ride needed to be refurbished.

Located at Coney Island's Luna Park, in Brooklyn, the Cyclone is constructed primarily of wood (standard lumber with some iron gussets and braces) in the center section and structural steel on the ends where the carriage makes 180-degree turns. New pressure treated lumber was installed in various areas for structural repair, and some steel had corroded to the point where replacement was necessary.

For the wood elements, the project included pressure washing to clean the surface and remove all loosely adhered coatings; wood was allowed to dry below 12 percent moisture prior to coating application. Crews sanded out slivers and hand sanded terminal edges of attached coatings.

A single coat of an acrylic universal primer was applied over the entire surface before application of one to two coats of a waterborne acrylic industrial enamel.

For the steel members, crews prepared the surface to a minimum SSPC WJ-4 (L) condition, attempting to remove all existing coatings (WJ-3 or WJ-2 conditions) as much as possible by increasing pressure up to 10,000 psi, using rotary heads and varying nozzle angles.

They spot primed crevices using a penetrating sealer and overcoated any existing cracked coatings. Next, they applied one full coat of a one-component, multipurpose epoxy, one additional stripe coat on edges, and one topcoat of a single-component acrylic polysiloxane.

With work beginning in October 2015, the coaster was restored to its classic glossy white finish in November 2015.

The George Campbell Award (Industrial) was presented for the:

The Eads Bridge opened July 4, 1874, and was the first span to connect public transportation across the Mississippi River. The 6,442-foot-long bridge is made up of three spans, constructed  of wrought iron and steel. It was the first bridge in the world to use true steel as its primary material.

Challenges overcome by the team included the difficulty of setting up access platforms on the bridge from the Mississippi River underneath, while dealing with a span whose stuctural pieces aren't all uniform in size. Blasting was a major challenge, the team says, noting that this was the first time the bridge was ever taken down to bare metal, and in some areas, nine layers of coating had to be removed.

Despite challenges related to weather and water levels, the team completed the project successfully in May 2016, without a complete shutdown of the road deck.

The 138-foot-tall La Porte Fairmont Park Elevated Water Tank has dominated the skyline in La Porte, TX, for 54 years. The 500,000-gallon welded steel tank was constructed circa 1962 and provides potable water to the surrounding residents of La Porte—including Matt Morris, who served as the project manager responsible for the rehabilitation work that transformed the “Plain Jane” structure to a vibrant mural that represents what makes La Porte so special.

Although the structure was still in serviceable condition, the coatings were aging and the structure was beginning to corrode, damaging the structure and presenting an eyesore to the community. Minor structural repairs to both the support structure and the water storage container were required prior to extensive surface preparation to receive the acrylic overcoat system. The new acrylic polymer exterior coating system is expected to extend the life of the structure and provide excellent color and gloss retention of the city’s new landmark.

Once the exterior acrylic coating was applied, a 360-degree wraparound mural was painted on the tank, extending from the balcony floor plate to the upper wall, to provide a unique postcard of what makes “La Porte Life by the Bay” special. The bright colors represent the vitality and energy that La Porte has exhibited for generations.

In addition to the exterior coating and wraparound mural, the interior surface areas were also recoated with new zinc urethane-epoxy coating systems. A new illumination system was also added to the balcony to highlight the picturesque portrayal during twilight hours.

A project that included the blasting and painting of the TVA Fontana Spillway Gates using a three-coat system consisting of epoxy and siloxane made it the first spillway gate with a coatings system of this kind applied in intermittent immersion service to replace a vinyl system.

Those involved say the TVA job was complex for several reasons. First, it required a complicated scaffolding system reaching more than seven stories on the front side at a complex angle.

Second, the project required the adaptation of a coating system to fit or exceed the performance requirements for the project.

Third, the coatings system needed to be applied within a specific, limited timeframe, the low water spillway season. In the past, the four-month window reportedly made it very difficult to complete the project due to the number of coats and drying schedule of the vinyl system.

According to the nomination materials, the project yielded a 75 percent reduction in VOCs and HAPs compared to the previously used vinyl system. The siloxane system used is both immersion grade and UV resistant, which is vital because these gates are underwater for six months and out of the water six months on the back sides.

The siloxane finish coat is said to allow for less water line staining year over year. Additionally, the higher sheen of the siloxane offers debris release and normal weather wash-off, keeping the appearance of the gate looking clean with consistent coloring at various water levels over the course of the season.

Last year was the 50th anniversary of the completion of the NASA Vehicle Assembly Building. At the time, 89,000 tons of structural steel was fabricated in Tampa, coated with a high-performance inorganic zinc protective coating, and shipped to the laydown yard in Cape Canaveral, where it was erected and touched up with the same coating.

According to the nomination, the VAB is on the National Register of Historic Landmarks, not simply because it was pivotal in our Moon landing, but also because it held many records for building construction at the time and for many years later. Moreover, the VAB is reportedly located at one of the most corrosive natural environments in North America. A single 3 mil coat of the coating applied to an SSPC SP 6 Commercial Blast protects it to this day.

The project started shortly after the death of John F. Kennedy, who had pledged to put a man on the moon by the end of the decade of 1960. The building was completed in 1966 in preparation for assembly of the Apollo 11 rocket, which left for the moon on July 16, 1969.

The SR-589 Veterans Expressway bridge structures over Waters Avenue, in Tampa, Florida, were renovated and expanded between 2013 and 2016, as part of a larger project to widen a six-mile stretch of the expressway.

The span, owned by the Florida Department of Transportation and Florida's Turnpike Enterprise, was coated by subcontractor Joe L. Mori, working with prime contractor SEMA, and using materials supplied by The Sherwin-Williams Company. Representatives of Jacobs Engineering and design engineer of record AECOM were also involved in the project.

The project involved the installation of new steel girders, which were coated with a Sherwin-Williams zinc-rich primer at the Veritas fabrication shop, then were cleaned by the painting contractor onsite, where an acrylic finish coat was applied.

The painting subcontractor dealt with humidity issues and rain as well as considerable pigeon droppings during the project.

The Veterans Expressway project was nominated in part due to the aesthetic demands of the project, which included multiple finishes and colors, and "V" designs embedded in retaining walls.

This award recognizes a coatings project that demonstrates extraordinary service benefitting a community or the industry. Two projects were honored for 2016.

The Bowker Overpass crosses over Boylston Street in the Fenway area of Boston and is located one mile before the finish line of the Boston Marathon. The Boston Strong slogan was added to act as a reminder of how the city came together during and after the tragedy of the marathon bombings on April 15, 2013. The slogan and its location also serve as a point of inspiration for marathon runners who pass directly under the structure on their way to the finish line.

The coordination and effort by all parties involved to complete the work prior to the April 18, 2016, marathon was outstanding, the nominator said. Renderings; coating materials; and containment, surface preparation, and coating application materials and labor were all donated by the participating companies. The prime contractor also provided traffic control and support for the work and the unveiling ceremony was held April 2, 2016.

MassDOT noted that it is very thankful and proud of all who were involved with this project.

The Bowker Overpass/Boston Strong Bridge project began May 2014 and was officially completed in August 2016.

The site of the World’s Fair in 1964 and, as such, a major landmark in the city of New York, the New York State Pavilion’s Tent of Tomorrow required some much-deserved TLC.

The structure is highly visible from two major highways as well as the thousands of flights to and from LaGuardia Airport every day, but the elliptical steel structure has been subjected to the elements and has sat in rust and ruin.

Although there have been man ideas about what to do with the building over the years, there was never enough funding to back any of the ventures, the nominator said.

The nomination credited the efforts of the local painters union, the New York Structural Steel Painting Contractors Association, and city council for the donation of a $3 million coating job that made the steel look like new.

The original color was matched as close as possible to give it the same sunny shine as it had in 1964. “In short, a very generous donation has restored this historic eyesore closer to its original glory,” the nomination stated.

The scope of work included an SSPC-SP1 power washing and SSPC-SP2/SP3 preparation of the entire steel structure followed by a full coat of a polyamide epoxy and a topcoat of acrylic aliphatic polyurethane.