SSPC, the Society for Protective Coatings, kicked off the exhibition portion of its annual conference Tuesday with a reception bringing together 143 exhibitors showcasing the latest in coatings, abrasives and other technologies. 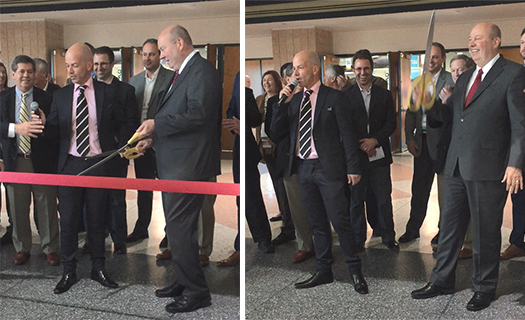 The conference opened Monday with the annual awards luncheon, at which more than 20 individuals, contractors, suppliers and local SSPC chapters were honored. Before the awards began, Ackx gave a welcome speech noting the increasingly international nature of the organization, and its growing profile worldwide. Ackx, of SCICON Worldwide in Belgium, is the organization's first president from outside North America.

"What we're trying to do is expand our relevance nationally and internationally, with the goal of being the organization of choice" in the protective coatings industry, added SSPC executive director Bill Worms, noting that SSPC standards are consensus standards, created by members of the industry. "Our mission is to take up the level of quality and performance and training in the industry. We believe in that wholeheartedly."

Awardees for 2017 included Robert Murphy, of Sherwin-Williams, who received the John D. Keane Award of Merit, and Benjamin Fultz, of Bechtel, who was honored with the SSPC Honorary Life Member Award.

Also honored were 10 student recipients of SSPC scholarships for 2016-17: Ruvi Chitemere, Junren Lin, Madhura Pate and Alison Rohly, all of North Dakota State University; Mason Kline, of the University of Pittsburgh; Feby Matthew and Christopher Znosko, of the University of Akron; Emanuel Mehas, of Saint Petersburg College; and Payton Nixon, of Belmont University.

For a complete rundown of awards and winners, see PaintSquare News’ special edition newsletter, which will be sent Wednesday (Feb. 1).

Technical presentations at SSPC 2017 began at 8:30 Monday morning (Jan. 30) and will continue through Thursday. Early presentations included a series on marine coatings, with presentations by Arcino Quiero Jr., of Newport News Shipbuilding, and J. Peter Ault, of Elzly Technology, among others.

On Monday afternoon, James McDonald, of Hempel Inc., presented on the topic of choosing the right paint to prevent delays, noting that different formulations of the same generic coating type can significantly reduce total project time and enable application even in colder conditions than normally thought.

Tuesday morning, Chrissy Stewart, PCS, and Cynthia O’Malley, PCS, of KTA-Tator Inc., presented their popular CSI: Coating System Investigation workshop, in which participants were able to choose steps to take in a hypothetical coating failure on a military submarine. Attendees were encouraged to use interactive polling software to help decide what methods to use to determine a cause and fix for the corrosion problem.

For full details on programs and other events, visit the conference website. SSPC 2017 continues through Thursday (Feb. 2).

Editor's note: An earlier version of this article mistakenly identified SSPC President Gunnar Ackx as being on the right in the above photographs; he is on the left.