A bridge linking Pennsylvania and New Jersey over the Delaware River will likely remain closed for at least two weeks after an inspection of a painting job uncovered a serious crack in a steel truss. 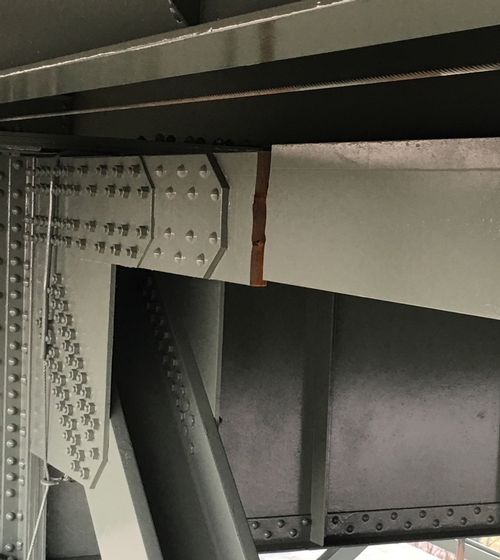 Images: Pennsylvania Turnpike Commission
The crack appears to completely separate the two portions of the truss, and has caused stress to be redistributed on the span, leaving the bridge in danger.

The Delaware River Turnpike Bridge, which connects Bucks County, Pennsylvania, with Burlington County, New Jersey, via I-276, was closed Friday (Jan. 20) when workers spotted the fracture. The crack appears to completely separate the two portions of the truss, and has caused stress to be redistributed on the span, leaving the bridge in danger.

The Pennsylvania Turnpike Commission, which operates the bridge jointly with the New Jersey Turnpike Authority, reported Saturday (Jan. 21) that stabilization work was underway while engineers analyze the damage and devise a more permanent repair plan. New plates will be added to connect the two pieces of the 14-inch truss.

A sample of the truss has been sent for forensic analysis, the PTC said. The initial analysis and planning will take about two weeks, and after that period, the agencies will be able to give a clearer indication of how long the bridge will be closed, and how long permanent repairs will take.

The Delaware River Turnpike Bridge opened in 1956, and reportedly carries about 42,000 vehicles per day. It is 1.2 miles long, and is part of a stretch of I-295 that connects the New Jersey Turnpike with the Pennsylvania Turnpike.

The fracture was found during what the PTC calls a routine inspection of painting work done by contractors hired by the NJTA. It is reportedly situated on the Pennsylvania side of the bridge, below the westbound right lane.

According to NJTA documents, Allied Painting Inc. has been the lead contractor on a $50.2 million project on the bridge, which began in 2014 and is scheduled for completion in 2018. The project includes blast cleaning, repainting, seismic retrofit, structural steel repairs, catwalk improvement and other work, according to the NJTA’s 2016 Capital Improvement Plan.

“This was a unique and complete fracture which may have happened quickly due to changing weather conditions,” said Pennsylvania Turnpike Chairman Sean Logan.

“We are stabilizing the bridge now to prevent further movement. However, out of an abundance of caution and to protect traveler safety, the bridge must remain closed until a full-scale analysis and repair plan have been completed.”

Editor's note: This story was one of our most popular of 2017, and appeared in our Readers' Choice issue on Dec. 27. The Delaware River Turnpike Bridge was closed for about six weeks while the span was stabilized using a jacking system, then a splice was made to fix the cracked area; it reopened March 9. Turnpike officials said the incident likely resulted from plug welds filling misdrilled holes, exacerbated by weather and oversized truck traffic.