The owners of a major bridge on the U.S.-Canada border have filed a new lawsuit in an attempt to stop the construction of a new bridge nearby.

Six companies owned by the Moroun family, owners of the Ambassador Bridge, are suing to halt construction of the Gordie Howe International Bridge, which has been in the works since 2004. The Ambassador links Detroit with Windsor, Ontario over the Detroit River; the Gordie Howe would be located just south. 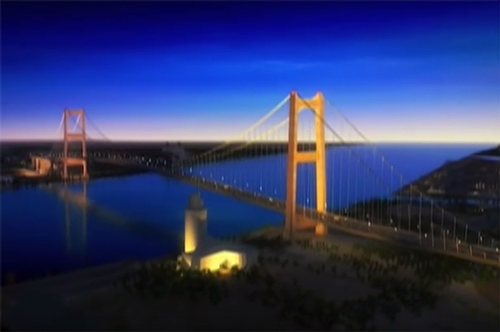 Renderings: Windsor-Detroit Bridge Authority, via YouTube
While designs have yet to be finalized, the authority has suggested the Gordie Howe International Bridge will either be a suspension or cable-stayed span.

Ambassador Bridge owner Manuel “Matty” Moroun has been a longtime, vocal opponent of the Gordie Howe International Bridge, which is intended to be a public crossing, owned by a Canadian Crown corporation called the Windsor-Detroit Bridge Authority. The Ambassador is the busiest border crossing between the U.S. and Canada in terms of trade volume.

In the lawsuit, the companies, which include the Detroit International Bridge Co., which runs the Ambassador, argue that Michigan Gov. Rick Snyder acted illegally when he worked out a deal with the Canadian government to fund construction on the American side of the bridge, without the approval of the Michigan legislature.

The companies, represented by attorney Mike Cox, also contend that the state legislature must approve the construction of any international bridge, per the state’s constitution. Legislation authorizing the bridge was never passed by state lawmakers, but Snyder signed onto an agreement with Canadian officials to move forward with the span in 2012.

Moroun and his companies have tried for years to block the Gordie Howe International Bridge from coming to fruition. Earlier this year, a federal judge dismissed a suit the Detroit International Bridge Co. filed arguing that the federal approval of the bridge was unconstitutional.

In September 2015, the same judge ruled that several other arguments Moroun made against the Gordie Howe construction were invalid.

In November 2016, the Windsor-Detroit Bridge Authority issued a request for proposals for the design, construction, financing, operation and maintenance of the Gordie Howe. The RFP process is expected to take 18 months; the construction is then reportedly predicted to last about four years. Construction of access roads on the Canadian side has already begun.

While designs have yet to be finalized, the authority has suggested the bridge will either be a suspension or cable-stayed span.

According to Crain’s Detroit Business, the Gordie Howe construction is predicted to cost at least $2.1 billion.

At the same time, Moroun’s Detroit International Bridge Co. has proposed a new Ambassador Bridge, to be built alongside the current bridge. That plan received U.S. Coast Guard approval in March 2016, but still needs a number of other government approvals before it can move forward.