The U.S. Navy and President-elect Donald J. Trump are both looking to expanding the country’s fleet, at a rate not seen since the Cold War. 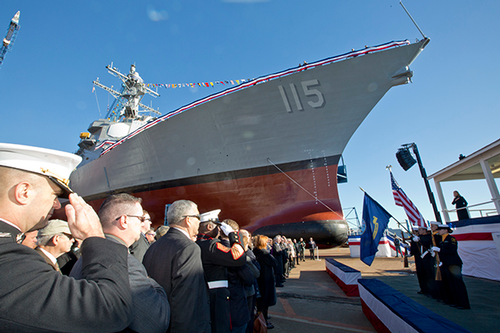 The Navy last month released a proposal to increase the size of its fleet by nearly 30 percent, from its current collection of 274 operational ships to 355. That would bring the force to its largest size since 1997, when it included 359 ships.

Trump had promised during his campaign to expand the Navy to 350 ships.

The 355-ship plan came as the result of a yearlong Force Structure Assessment conducted by the Navy. The FSA will be taken into consideration as the Navy puts together its fiscal year 2018 30-year shipbuilding plan.

Secretary of the Navy Ray Mabus said that counterterrorism efforts and “competing with a growing China and resurgent Russia” underscore the need for a growing Navy. “We have successfully reversed the decline in shipbuilding that occurred from 2001-2009, putting 86 ships under contract over the last seven years,” Mabus noted.

The Navy fleet has generally declined in size since the 1950s, when it included more than 1,000 ships.

The Fiscal Times estimates the boost in shipbuilding would cost the U.S. government about $9 billion additional per year, up to about $25 billion in shipbuilding costs yearly, compared with the $15.9 billion it says the Navy has spent annually on average over the past 30 years.

A spike in Naval shipbuilding could have major implications for U.S. shipbuilders. According to a 2015 National Defense University report, the military accounts for 69 percent of shipbuilding and repair work done in the United States annually.

The Shipbuilders Council of America released a statement supporting the Navy’s new expansion goal, and addressing the lasting effects of the Budget Control Act of 2011, which the organization says will result in decreases in discretionary defense funding each year until 2021.

“In order to begin the work of building a larger fleet, it is imperative Congress end sequestration,” the trade group said. “The U.S. shipyard industry stands ready to build this fleet of the future that will ensure the continued flow of international commerce and the security of our nation.”