The University of Oregon will receive $6.9 million in a settlement with the architect, engineer and contractor of a residence hall with cracking concrete floor slabs.

The university filed suit in March 2015, blaming Hoffman Construction of Portland, Catena Consulting Engineers, and Zimmer Gunsul Frasca Architects LLP over the concrete slabs in the Global Scholars Hall dormitory. The building, finished in 2012, has experienced excessive deflection, the school argued, leading the building to shift and twist. The concrete slabs, according to the suit, are to blame. 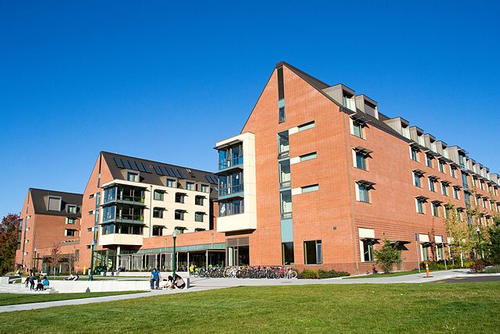 Visitor7, CC BY-SA 3.0, via Wikimedia Commons
The University of Oregon will recieve $6.9 million from three firms in a settlement over cracking concrete slabs in the Global Scholars Hall dormitory.

The settlement, which accounts for $5.5 million to be used to fix the defective slabs and $1.4 million to cover legal and engineering costs already incurred, was first reported earlier this month by the Eugene, OR, Register-Guard.

The 185,000 square-foot building consists of three towers, and houses 450 students in addition to hosting facilities including a dining hall, library and performance space. It cost $55 million to build.

According to the Register-Guard, the university, in its suit, said that the building has remained safe and habitable, but has required repairs to address the cracking of floors and walls, and their effect on fixtures.

“The deflection and cracking of the floor slabs are substantial and have led to defects in the walls and ceilings and uneven floor surfaces in the building,” the suit read. “The deflection also has impacted the performance and functionality of the doors, windows, furniture and built-ins of the building. It also is expected to impact the plumbing, electrical, and other building systems.”

The suit specifically alleged that ZGF designed the slabs with "improper thickness and/or strength," and improperly calculated the deflection that would occur.

University general counsel Kevin Reed told the Register-Guard that warping in the building is noticeable. “It’s like looking in a fun-house mirror,” he said.

The firms named in the settlement did not immediately respond to requests for comment Monday (Dec. 19).

The school originally sought $8.5 million in the suit. According to the Daily Emerald, Oregon’s student publication, Catena Consulting disputed its inclusion in the suit early on, arguing it hadn’t been responsible for the building design or construction.

Contractor Hoffman argued in 2015 that the university had signed off on the building design, and therefore was responsible for the issues that had come up. The construction firm filed a motion to have its part of the suit dismissed, but earlier this year a judge denied the motion.

The suit was set to go to trial in January 2017 before the settlement was reached.

According to reports, the three firms have not yet determined the amount each will contribute to the final sum. Payment to the university is expected in April 2017.