The American Institute of Architects announced Wednesday (Dec. 7) that the late Paul Revere Williams will become the first African American to receive the AIA Gold Medal, and the 73rd honoree in the award’s history.

Williams, a Los Angeles native who lived from 1894 to 1980, was the first black architect to become part of the AIA, then the first inducted into its College of Fellows. Practicing mainly in California during his five decades of work, he designed buildings throughout Los Angeles, and houses for celebrities like Lucille Ball and Frank Sinatra. 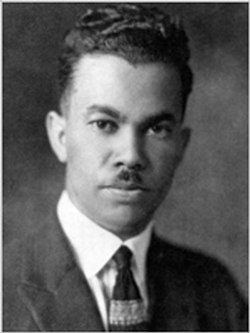 Courtesy of AIA
The late Paul Revere Williams will become the first African American to receive the AIA Gold Medal.

Williams left his mark on buildings like the famed Beverly Hills Hotel, which he redesigned in 1949, and worked in both traditional and modern styles. While Williams was known for designing grand homes for wealthy clients, he also helped design public housing in Washington, D.C., and Los Angeles. In all, he designed more than 3,000 buildings.

Success in Spite of Discrimination

Working in mid-20th century America, Williams faced uncomfortable attitudes toward race, building homes that in some cases he would have been precluded from buying and, according to the Los Angeles Conservancy, learning to sketch upside down for the benefit of white clients who might not want to sit next to a black man.

“Our profession desperately needs more architects like Paul Williams,” wrote William J. Bates, FAIA, in his support of William’s nomination for the AIA Gold Medal. “His pioneering career has encouraged others to cross a chasm of historic biases. I can’t think of another architect whose work embodies the spirit of the Gold Medal better. His recognition demonstrates a significant shift in the equity for the profession and the institute.”

Also announced last week: The 2017 AIA Architecture Firm Award will go to Leddy Maytum Stacy Architects (LMSA). The award is the highest honor that can be given to a firm by the AIA, and goes to a firm that “consistently has produced distinguished architecture for at least 10 years.”

Founded in 1983 by William Leddy, Marsha Maytum and and Richard Stacy, all Fellows of the AIA, LMSA has won more than 140 design awards, and has worked on various types of projects, including adaptive reuse and affordable housing.

AIA specifically calls out the firm’s work on the Plaza Apartments, a complex in San Francisco that provides housing for the chronically homeless.

“Their passion for addressing some of the profession’s thorniest issues including regenerative design, universal access, social equity and housing for the most disadvantaged has been consistent and impressive,” wrote Bob Berkebile, FAIA Emeritus, in his letter supporting LMSA’s nomination.

LMSA and Williams will be honored at the 2017 AIA National Convention, to be held in Orlando, FL, April 27-29.