Now in its fourth year of construction, the new Tappan Zee Bridge, aka the New NY Bridge, continues to reach major milestones in its path to completion, and certain elements of its superstructure are close to wrapping up.

Moreover, the project remains “on budget and on schedule,'' she said.

The nearly $4 billion New NY Bridge will be a 3.1-mile twin span cable-stayed bridge with angled main span towers. It is said to be the single largest bridge construction project in New York’s history. The project is slated for completion in 2018.

In a little over one year, the bridge’s signature design features—the eight, 419-foot towers of the bridge's main span—are expected to be complete within a matter of weeks and the construction forms removed. 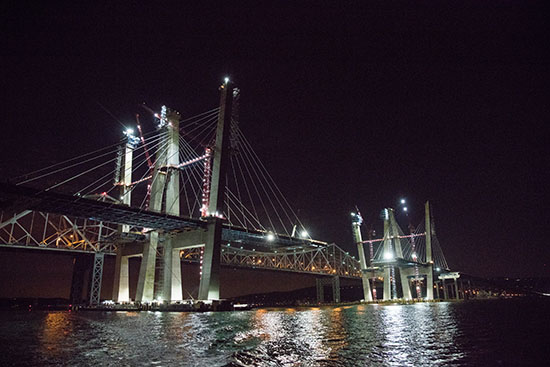 Two months ago, the towers had not yet reached a height of 400 feet, Barbas noted.

Tappan Zee Constructors (TZC), the design-build consortium responsible for the new bridge, credits this achievement to crews working rotating shifts to allow work to continue around the clock. An average of two dozen skilled workers handled the main span night shifts, with the assistance of strategically placed lighting, the Thruway Authority said.

Night shifts also allowed TZC to accomplish work that would impede the progress of others on the main span, such as the adjustment of the towers’ blue jump forms. This streamlined process proved essential to the success of the project’s time-sensitive operations, such as the pouring of concrete, the agency said.

“Working at nights has its challenges but it allows us to get our work done safely without interfering with other operations,” said Billy Pharrell, a foreman for Carpenters Local 279 and Tarrytown native.

Earlier this year, TZC was recognized as one of the safest construction ventures in the country.

As of Dec. 1, TZC had completed installation of all road deck panels for the westbound bridge’s approaches, i.e., the Rockland-bound span, the Thruway Authority announced in a statement.

TZC had also placed nearly 3,000 of the steel-reinforced concrete panels, weighing as much as 74,000 pounds each, atop the westbound steel girder assemblies to create the base driving surface of the bridge.

That is nearly half of the 7,000 panels needed for the road deck, according to Barbas.

Deck panel installation, which reportedly began in November 2015, is ongoing on the eastbound Rockland approach, as well as the center of the bridge. These panels will be placed in conjunction with the cable stays being strung to support the roadway, the agency noted.

The panels are prefabricated off-site at a facility near Albany, then floated downriver to the construction site, according to the Journal News.

TZC will continue to create the final driving surface of the bridge by placing a 1-inch concrete polymer overlay on the deck panels.

According to contractors, the polymer ensures durability and a safe, even ride for drivers on the portion of the bridge drivers will use when the first part of the structure finally opens to traffic in 2017.

When that happens, traffic is slated to be moved to the west-bound span to accommodate demolition of the existing Tappan Zee Bridge and allow for the completion of the east-bound span, which cannot be connected to either shore until the current bridge is gone, reports said.

TZC continues to install stay cables on the new westbound and eastbound spans. The state indicated nearly 60 stay cables are now fully anchored and tensioned on the 419-foot main span towers, compared to the 15 Barbas reported in September.

Installation began on the new eastbound bridge’s system in November, at which time, more than 50 stay cables had been fully anchored and tensioned on the westbound side.

The stay cables are comprised of numerous metal strands, tightly packed in a protective sheath. After the initial installation process, TZC installs additional strands inside the sheath to provide further strength, the agency said.

Crews are installing new structural steel sections and stay cables on alternating sides of the towers as work continues, it explained.

The Thruway Authority added that TZC has also installed the first of eight overhead gantries, which will be outfitted with electronic message and traditional exit signs.

Crews also continue construction of the New York State Thruway Authority’s new maintenance facility in Tarrytown, which will enable instant access to the bridge for several groups of Thruway personnel.

Work on the facility, which is expected to open in 2018, has included pouring concrete and installing steel reinforcement. Bridge maintenance teams currently operate from a temporary facility near exit 12 in West Nyack.

Dan Marcy, a member of the authority's community outreach staff for the project, added to Barbas’ report, noting that TZC has so far spent or committed $2.26 billion to the undertaking.

He broke down the costs to cover approximately $1 billion to the project’s 1,697 subcontractors, $807 million for construction materials, and $453 million for indirect expenses like insurance.

He further categorized the regional makeup of the job’s subcontractors to demonstrate that 729 are located in New York, while others are based out of Washington, California, Virginia, Pennsylvania and North Carolina—“a reflection of the small pool of suppliers for some of the highly specialized components of construction,” the Times-Herald Record stated.

To date, more than 6,300 people nationwide have contributed to the bridge's construction, it added.