IUPAT (Hanover, MD) partnered with these groups to create the Jornaler@ App, a resource designed to hold employers accountable and end an illegal practice that costs workers billions of dollars a year, the union said.

While wage theft, or the denial of earned wages, is said to be rampant across many industries, day laborers are particularly susceptible for many reasons, including misperceptions about their immigration status, according to IUPAT. 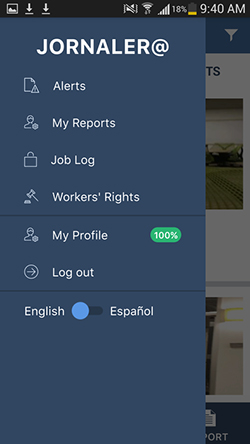 Images: Jornaler@ Developers
The Jornaler@ App, launched last month by the International Union of Painters and Allied Trades and other labor groups, was developed to help workers safely combat instances of wage theft by reporting abusive employers and other violations.

“The IUPAT is proud to have worked with our community partners and organizations to help build the framework of a new worker movement for the 21st century,” said IUPAT General President Kenneth Rigmaiden.

“Wage theft is a costly national epidemic, and this app will serve as a powerful tool to protect the workers who push this country forward every day.”

It works by connecting similarly situated workers, notifying them instantly of bad employers and amplifying that message to a network spanning entire metropolitan areas, the groups explained.

Jornaler@ can be used by any worker with an irregular schedule and varied wages, the developers said, noting that data shows that these circumstances create a heightened risk of wage theft.

Workers can use the app to keep a record of hours, hourly wage, location, breaks and more; it also creates an in-app “Job Log” for each user that shows weekly and annual wages, as well as a monthly average wage for jobs in the area.

The information collected by the app will be managed by day laborer worker centers, labor unions and other organizations that wish to participate, IUPAT explained.

In the event of wage theft, the worker has the necessary documentation to begin a complaint in most state administrative proceedings, according to the developers. Moreover, workers are able to get assistance in filing their claim at a network worker center, they noted.

"Particularly now, as xenophobes seek to divide workers and undermine government institutions, we must organize, innovate and stand together to defend ourselves,” said Pablo Alvarado, the executive director of NDLON.

“This new app will encourage organizing and will send a powerful message to abusive employers that wage theft will not be tolerated."

Additionally, this year marks the 10-year anniversary of the AFL-CIO’s historic partnership with NDLON, which sought to end the denial of wages to immigrant workers and opened the door for worker centers to formally participate in the labor movement.

“The launch of this app is very important. This is an example of using technology as a tool for shared prosperity,” said AFL-CIO President Richard Trumka.

“We want to make sure that every worker in this country knows that they are not alone,” Trumka added. “We continue to stand firm on the side of all working people and commit to protecting these day laborer corners the way we will protect our union halls, in the face of any attack.”