Abnormally dry conditions in one southern state appear not only to be putting restrictions on residents’ recreational activities, but also taking a toll on state highways.

“Our biggest problem is large cracks in the asphalt that are becoming a hazard for the traveling public,” he added, although state officials are not aware of any accidents having occurred as a result of the cracked road surfaces. 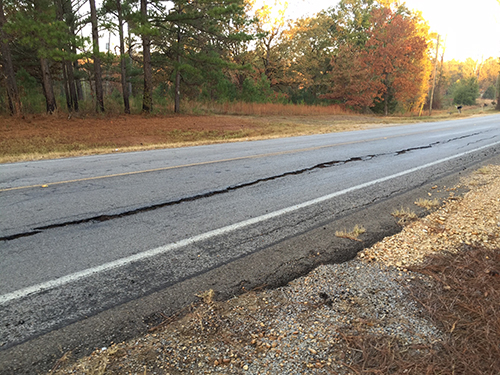 “It’s not unique to one part of the state,” MDOT spokesman Jason Scott told the Sun Herald, which serves southern Mississippi.

According to MDOT, the crumbling roads are resulting from the impact of extreme drought conditions on the soils beneath the roadways.

Mississippi has large deposits of at least three different types of expansive clay soils, including Yazoo clay, throughout the state.

These soils pose a challenge for road construction and maintenance because they are susceptible to change based on weather conditions, the agency says.

Yazoo clay, for example, can expand and occupy up to 400 percent more space when wet than at normal moisture levels—but, as the soil loses moisture, it shrinks, leaving a void between the soil and asphalt or layer of earth above it.

As soil continues to shrink, the void becomes larger and the weight of the pavement and vehicles causes the roadway to sink and crack creating “slides” and “drop offs,” MDOT explains.

“When traffic goes over it multiple times, that’s what creates the cracks,” Scott told the Sun Herald.

However, Scott notes, repairs aren't going to be as simple as an overlay; rather, damaged sections will reportedly need to be dug up for soil to be to replaced underneath.

When the drought ends, MDOT says it will assess the overall needs and extent of the damage before any roads are properly repaired.

Rural highways lined with trees are suffering the most from cracking asphalt, transportation officials add.

This is because in the mid-1900s county roads given to the state resulted in a paved network of farm-to-market routes—many of which are today’s Mississippi highways. This translates to a narrow right-of-way lined by trees.

“As the trees reach further for water during extreme drought, the close proximity of trees to the roadway combined with expansive clay soils accelerate the shrinkage of the underlying roadbed materials,” says MDOT Executive Director Melinda McGrath.

When fully grown, a tree will absorb 100 gallons or more of water from the ground on a hot day, the agency explains. So, during drought conditions, trees located close to the road draw all the moisture out of the soil beneath the roadbed.

This, coupled with already shrinking soil, will cause major damage to the highway, MDOT says.

"With limited resources, it’s not an option to obtain more right-of-way along state-maintained highways to minimize the effects on existing routes,” McGrath notes.

MDOT reporteldy accounts for later extreme weather conditions during the design phase of a project.

"We already know it will take more than simply placing a lift of asphalt to repair most highways," McGrath says.

These techniques, along with construction quality control, reduce the likelihood the pavement will crack and settle in times of drought, it says.

“Even though we can’t predict or stop a drought, we do take necessary, preventative measures to protect our highway system and keep the traveling public safe.”

“Our top priority is the safety of the traveling public in Mississippi. I’m proud of our maintenance crews and engineers for the commitment they have shown and continue to show to keeping our roads safe during this drought.

“Their efforts are protecting lives each and every day.”