The renovation of the Brooklyn Bridge, originally predicted to wrap up in 2014 and cost $508 million, has yet to be completed—and now looks like it will cost more than $800 million.

The New York Post reported Friday (Nov. 11) that the bridge repair is now projected to cost $811 million, a more than 60 percent jump from the original price tag. That’s also $200 million higher than the most recent cost estimate, released in 2015. According to the Mayor’s Office of Operations Capital Projects database, the project is now slated to wrap up in April 2017. 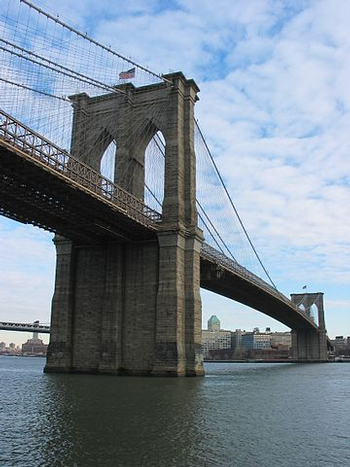 Keith Pomakis, CC BY-SA 2.5, via Wikimedia Commons
The Brooklyn Bridge rehab has been slowed primarily by the uncovering of unexpected cracks, fissures and holes in the structure.

The Brooklyn Bridge repair began in 2010, funded partially by money from the American Recovery and Reinvestment Act, the federal stimulus bill signed by President Barack Obama in 2009. The purpose of the project is to repair and rehabilitate ramps and approaches to the bridge, and repaint the entire steel structure to prevent corrosion.

The original reopen date was slated for April 2014, but work moved along slower than planned, for a number of reasons. As the New York Daily News revealed in 2015, lead contractor Skanska-Koch was slowed by work stoppages related to major events like 2014’s Super Bowl XLVIII, held in nearby East Rutherford, NJ, and weather events like Hurricane Sandy. In 2012, a crane pulled by a tugboat hit the scaffolding and containment unit suspended under the bridge.

The biggest issue, however, has been structural issues uncovered during the renovation process. Early in the project, after some coatings were removed from the structure, engineers found at least 30 “red flags”—cracks or other structural problems that had to be addressed. The Daily News then reported in 2015 that 3,000 more cracks, fissures and holes had been flagged.

At the time of the 2015 report, crews had finished most of the access and ramp-widening work, but lead-paint removal was still underway.

According to the Post, New York City will provide 54 percent of the final cost of the project, with federal money filling out the remainder. The Mayor’s Office of Operations says $661 million, or 82 percent of the predicted total, has been spent on the project to date.

The project has subjected bridge users to regular single-lane closures and, the Post says, a total of 17 full weekend closures. The current renovation is the first major repair to the bridge since 1958.

The Brooklyn Bridge, a hybrid cable-stayed and suspension bridge, was completed in 1883, and was the first of its kind ever constructed. Its two towers were built of limestone, granite and Rosendale cement. The bridge is both a National Historic Landmark and a New York City Landmark, and in 1972 was named a National Historic Civil Engineering Landmark.

The bridge connects Manhattan and Brooklyn over the East River, and according to NYC DOT, it serves 124,000 vehicles each day.