Workers on a famous bridge in Sydney unexpectedly found asbestos under concrete slabs earlier this year, and some government officials are questioning why they didn’t find out for nearly 10 months. 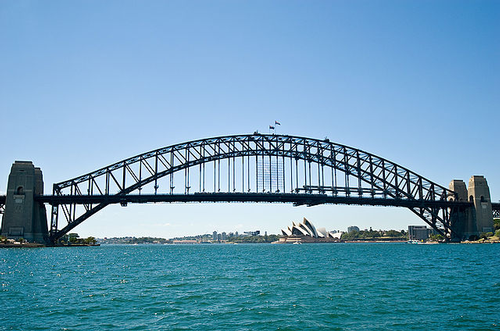 Steve Collis, CC BY-SA 2.0, via Wikimedia Commons
The historic Sydney Harbour Bridge is nicknamed “The Coathanger” because of the shape of its arch.

A crew on the Sydney Harbour Bridge, which carries vehicular traffic, a rail line and pedestrian and cycling lanes over Sydney Harbour, reportedly discovered the asbestos while removing a toll booth in February 2016. It’s been described as a “small amount” of asbestos, under concrete slabs thought to have been installed in the 1950s.

Asbestos, a fibrous silica material, was long used for fireproofing and insulation before it was revealed to pose serious health risks. While at least some of the health problems associated with the material were known as early as the 1920s and ‘30s, it was not widely banned until the 1980s. Exposure to asbestos can cause fibers to collect in the lungs, leading to asbestosis, mesothelioma or lung cancer.

The 3,770-foot-long through-arch bridge was constructed in the 1920s and opened in 1932. It is subject to continuous maintenance work. In 2013, the bridge made news when two autonomous blasting robots were used to strip old paint from some of its surfaces as part of a major repainting job; at the time, the BBC noted that cleaning the bridge was risky for workers, “bringing risk of exposure to asbestos and old paint.”

'I Would Expect Better Procedures'

The workers who discovered the asbestos on the bridge did so last February, but New South Wales Roads Minister Duncan Gay said last week that he was informed of the find only on Thursday (Nov. 10).

“While it is not uncommon for asbestos to be found during infrastructure work, I would expect better procedures and guidelines to be in place for the escalation of findings,” Gay said in a statement relayed by Australian news site news.com.au. Gay said an investigation is underway to determine how the asbestos issue was remediated.

Gay said that every worker who was onsite is being contacted to monitor for any health issues related to the asbestos. Government sources said the asbestos had low potential for airborne exposure and therefore likely posed little risk to workers, and was not likely to cause any health issues for motorists or pedestrians using the bridge.

More toll booths are planned for removal this summer, and Gay told the Daily Mail that asbestos testing has already been done, and appropriate asbestos management will be carried out at those sites if necessary.

The historic Sydney Harbour Bridge is nicknamed “The Coathanger” because of the shape of its arch. It was designed by Dorman Long and Co. Ltd., of Middlesbrough, England, and was inspired by New York City’s Hell Gate Bridge. It was the world’s widest long-span bridge, at 160 feet wide, until the Port Mann Bridge, near Vancouver, British Columbia, was opened in 2012.